The ancient festival of ‘Samhain’ – the first day of Winter for the ancient Celts – was traditionally kept on November 1, now the Feast of All Saints, and the vigil of this day, ‘Oíche Shamhna’ (Hallowe’en), is still celebrated on the last night in October.

Hallowe’en was originally a season, not a single night; it was celebrated during the last fortnight in October and early November. ‘Bealtaine’, May 1, and the beginning of Summer, was celebrated as a Fire Festival by the ancient Celts; similarly ‘Samhain’ was an occasion when bonfires were lit to guide people home, or to welcome travellers. The name ‘Samhain’, or Summer’s End, marks the closing of the door to the year which opened at ‘Bealtaine’ or May Day.

Hallowe’en was also known as ‘Oíche na Sprideanna’ (the night of the spirits), or ‘púca’ night, because of old peoples’ belief that both the fairies and the spirits of the dead were active then, and could cross easily between this world and the Otherworld.

‘Samhain’ can feel like a time of decay, of disillusion and of the death of nature. Yet, as far as Nature itself is concerned, it is a time of richness and plenty, of renewal and fertility. The wild fruit, hips, haws, sloes, berries and seeds are all falling to earth to feed the small creatures, to nourish the soil, and to sow their seeds for the next cycle.

Hallowe’en was a night when the housewife made a little feast for the family. The vigil of the Feast of All Saints was for many centuries a day of abstinence, that is to say, a day on which no meat was eaten. Thus, the traditional dishes at Hallowe’en did not include meat. A favourite food was colcannon (pandy, champ) that is mashed boiled potatoes, mixed with cooked green cabbage and chopped raw onion, and seasoned with salt and pepper. Stampy cakes were made from a blending of grated raw potatoes and flour, flavoured with sugar, caraway seeds and cream; boxty was similar, but made with cooked mashed potatoes and grated raw potatoes. Oatcakes and pancakes were favoured too, as were dumplings, apple cake, blackberry pie and puddings of all sorts.

Hallowe’en was a night for children’s games. In one game, a dish of water was placed on the kitchen floor; a silver coin or two were thrown in and large apples set floating on it; children, with their hands behind their backs, endeavoured to take up the former with their lips and the latter with their teeth; if they succeeded they were allowed keep the prize. This was known as ‘dunking’. Another game was ‘Snap-Apple’. In this game an apple was attached to the ceiling with a string and the children tried to grasp it in their mouth without any assistance from their hands.

Hallowe’en was also known as ‘Oiche na haimléise’ (the night of mischief). In places it was a custom for teenagers to assemble in gangs and headed by a few horn blowers, to visit the farmers’ houses and levy a kind of blackmail, good-humouredly asked for, and as cheerfully given. This was a night when individuals were dared to commit a prank on some individual known to be cranky or hot tempered. They used to knock on his door and run, maybe to climb up on the roof and pour water down his chimney and then to escape by running off. The cart-wheels might be taken off the cart and thrown on the roof or the plough might be thrown into the manure heap.

Other pranks were suggested by the belief that spirits were abroad. The wandering about of the fairies gave rise to their impersonation by groups of boys and young men bent on mischief. Houses and farmyards were visited by the ‘spirits’, dressed in weird garments, and with masked or blackened faces. They howled and moaned at the windows or down the chimney or set up a carved turnip head made ghastly by a lightened candle within. Now we have pumpkins instead of turnips.

Games and pastimes, which included divination (or looking into the future) were sure to be performed in any household which included young people. The best known of these and the only one today, is the inclusion of certain objects in the ‘báirín breac’ (barm brack), a ring, a small silver coin, a button, a thimble, a chip of wood and a rag were mixed in with the dough and foretold the finder’s future. The ring meant early marriage, the coin wealth, the button bachelorhood and the thimble spinsterhood, while the ‘cipín’ (stick) revealed that the finder would be beaten by their marriage partner and the rag meant poverty. Some put in a pea and a bean to tell of future poverty or wealth, the pea meaning poverty,

The most common children’s custom today is ‘Trick or Treat’ when children dress in old clothes and wearing masks, go from house to house and are rewarded with sweets, nuts and some coins. This was an old Irish custom and was brought to the USA by the Irish and has returned, ‘Americanised’ as ‘Trick or Treat’.

Mon Oct 4 , 2021
As the 2021 college year begins at University College Cork, a new wave of students may not realise that their campus is a place where executed men, fighting for Irish freedom, were buried 100 years ago. Pauline Murphyreminds us of their names and the part they played in history.  In […] 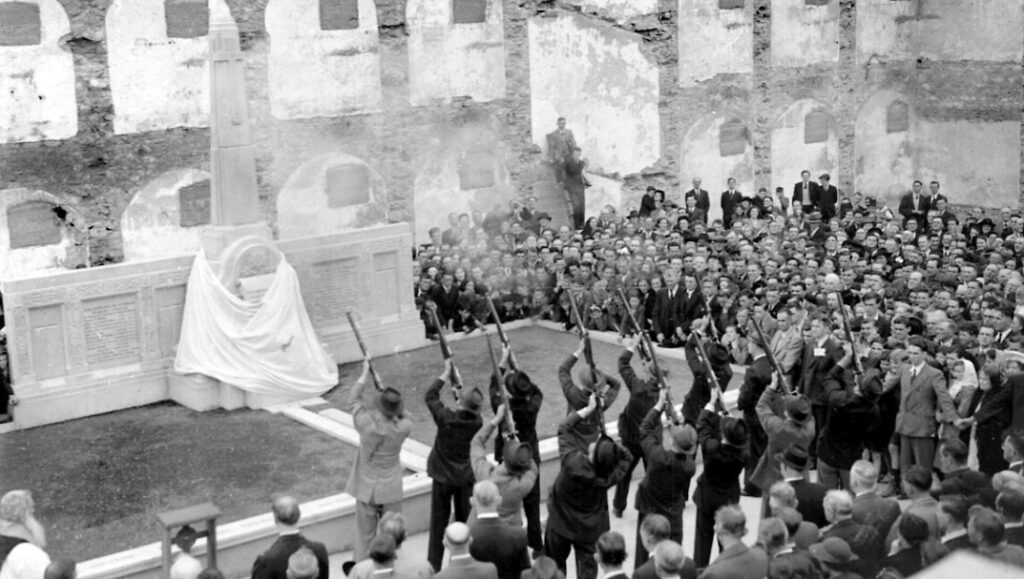