The Great Fire of London is the worst in London’s history. First igniting in a baker’s shop on Pudding Lane belonging to Thomas Farriner, the fire swept through the city from September 2 until September 5 in 1666. While only six deaths were recorded, it destroyed a huge area, including most of the civic buildings, old St. Paul’s Cathedral, 87 parish churches and 13,200 houses. The famous diary of Samuel Pepys gives a first-hand account of the event. As a result of this fire, building codes changed, requiring chimneys to be built much narrower than previously. While this may have lessened the risk of fire, the ramifications of the new narrower flues set in motion a dark period of history that is often overlooked – a time when children were horrifically exploited and many lost their lives in the dangerous labour of sweeping chimneys. Despite deaths, extreme ill health and obvious disfigurement, as well as public outcry from the families of the children in the interim, the exploitation of children for their labour in this position lasted close to two hundred years. It wasn’t until the introduction of a flexible cleaning mechanism by American inventor and anti-child labour campaigner Joseph Glass in 1828 and, with his help, the implementation of the ‘Chimney Sweepers’ and Chimneys Regulation Act’ in 1840, that it became illegal for anyone under 21 to work as a chimney sweep.

Measuring only 18 inches in width, the new chimney flue essentially made it impossible for grown men or women to do the job. It was also a dangerous job with few willing to accept the risks that came with it. However the newly-designed chimneys still needed to be maintained, which led to unscrupulous people in the trade buying orphans from the local parish or from poverty-stricken parents. Offered money by the ‘Master’ sweeper for one or more of their children, financially struggling families were taken in by the promise that the child, ideally age six when starting, would learn a trade and become the Master’s ‘apprentice’ and therefore live a better life than they could provide. At the time, the price of a child ranged from seven shillings to four guineas, a one-off transaction. This was an unpaid position, so for all intents and purposes the child was a slave, bound to their master until adulthood.

The bulk of a chimney sweep’s job involved climbing up the flue with a large brush held over their head. The flues were incredibly narrow so it was common for the child to complete the work naked. As they moved through the flue, they knocked loose soot to the ground, which was collected afterwards and resold by the master at a profit, mainly to farmers as fertiliser. The soot was also used for other things like shoe polish and toothpaste. Victorians believed for a time that soot made your teeth white, however, this was likely a misunderstanding, as the chimneys sweep’s teeth looked much whiter due to them being covered in soot. The soot trade was an enormous business in Victorian Britain.

Under law the Masters did have some obligations to the children. They were supposed to teach the apprentice the craft, feed them, clothe and shelter them and allow them to attend church, among other things. How well any of these things were enforced is not well documented. What is documented is that after a seven-year apprenticeship, the sweep could graduate to ‘Journeyman’, eventually going on to work for a Master of their choice.

What is also known is that the working conditions for these children were horrific. Asthma and other breathing-related ailments were common, as were sores and other inflammations on the eyelids. In almost every case, the child’s growth was stunted, as a result of the work they carried out. This work required the sweepers to remain crouched in unnatural positions inside the tight chimneys, which damaged their growing bones and joints. A later study showed that the knees and ankles were the most heavily affected areas. Furthermore, the job itself would have been particularly frightening for the children. If the child was taking too long to complete a certain job, it was common for their master to light a fire at the base of the chimney, so that the heat and the smoke now rising up the chimney flue would encourage the sweep to work faster. This is where the saying ‘someone lit a fire under him/her’ originated.

Obviously the inside of the flues were pitch black and the chimneys were incredibly claustrophobic and often confusing to navigate on account of the inherent darkness. Moreover, even if the child was small enough to get into the chimney flue they were required to clean, there was no guarantee they would be able to get back out. The chimneys were often built in rows along the sides of buildings and their flues often merged together at points in their structure. A chimney sweep who climbed from the beginning of the flue all the way to the roof to clean it, could very easily return down the incorrect flue. Additionally, a sweep could take the correct flue but take a wrong turn at an interconnected point on the way back down. Sweeps who entered the wrong chimney or got lost in the flues could suffocate or burn to death.

Many young chimney sweeps were fatally lost in the darkness. If a sweep did get stuck in a chimney, the standard operating procedure was to either let him/her perish or send in a second sweep to try and rescue the first child. These rescues were often unsuccessful and in such cases both sweepers would be lost. If this were the case, the house or the walls of the building would be torn down so that they could be removed.

While the ‘Chimney Sweeper’s Act’ was introduced in 1788, it wasn’t properly enforced and therefore was largely ignored. Even with so many deaths in the trade, the invention of a mechanical chimney sweep by George Smart in 1803 was also ignored.

Joseph Glass’ improved sweeping mechanism in 1828 finally brought about some change. This basic, yet ingenious device consisted of cane rods connected by brass interlocking joints; the final product was a flexible wand that was capable of navigating the complex flues. The device, which Glass didn’t patent, was approved by the government and, in 1829 Robert Peel ordered it to be used in all government buildings. More acts were introduced and amended in the intervening years. In 1824 the ‘Chimney Sweeper’s Act’ was introduced largely under the testimony of Joseph Glass. This law prohibited the Masters from hiring any boys under the age of 14 to become an apprentice. While progress was being made, protection for children was still insufficient.

Finally, in 1840 the ‘Chimney Sweepers’ and Chimneys Regulation Act’ made it illegal for anyone under 21 to work as a chimney sweep. However, the trade continued surreptitiously for another 35 years until 1875: In February of that year, George Brewster, a 12-year-old chimney sweep, became the last child in England to die on the job. His master, William Wyer, sent him into the Fulbourn Hospital chimneys, where he got stuck. A wall was pulled down in a desperate attempt to rescue him but George died shortly after his rescue. Due to huge public indignation, Wyer was charged with manslaughter and, in September of 1875, a bill was pushed through which eliminated the practice of using children as chimney sweeps entirely. This bill required adults who wished to continue in the trade to be licensed to do so by the police.

Mon Oct 4 , 2021
A West Cork Farming Life: Victor Sprake and Deborah Ní Chaoimhe, Camus Farm, Ardield, Clonakilty Tell us about Camus farm…what does it consist of? We moved down from Kildare and bought the 30-acre farm here about 15 years ago and began converting it into an organic farm. We’re certified with […] 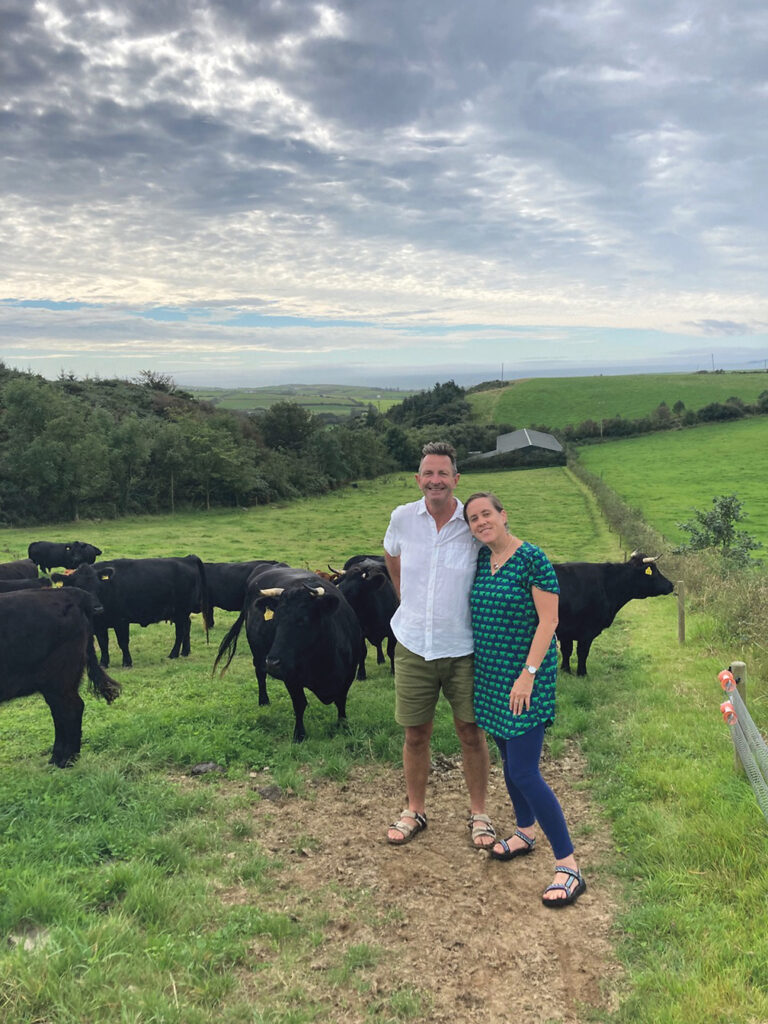