The pig was always highly praised by the Irish for its succulent meat, and in legend it was the favourite meat of gods and heroes at their feasts in the otherworld. The pig was also respected for its bravery and ferocity in defending itself against attack, and so was seen as a symbol of the warrior spirit.

As the wild boar (an torc) has been extinct in Ireland for several centuries Irish folklore about the pig mainly concerns the domestic animal (an mhuc). In some parts of Ireland it was considered good luck to drive a pig into the house on May morning, to ensure good luck for the coming summer. Pigs were believed to be able to see the wind, and thus forecast the weather. It was also thought that pigs had such acute hearing that they could hear the grass growing.

In Irish folklore it was believed that the mating of pigs was linked to the cycles of the moon.  If the sow came into heat for the boar when the moon was full she would have a large litter.  If she came into heat as the moon was waning, then the litter would be small.  In Britain, it was similarly believed that animals, especially pigs, should not be slaughtered when the moon was waning or the meat would shrink too much when boiled. They should be slaughtered instead when the moon was waxing. It was also believed in Ireland to be unlucky to slaughter a pig on a Monday. In parts of Scotland people would not eat pork at all, probably because of the Old Testament prohibition in Deuteronomy about pork being an ‘unclean meat’. For some Scottish people this prohibition was so strong that it was considered unlucky to even say the word ‘pig’ or ‘swine’; misfortune could only be avoided by touching ‘cauld (cold) iron’ afterwards. Interestingly, among fishermen of the West Cork coast the use of certain words was taboo while aboard their boat. They would not refer to a fox, a pig or a  priest. Instead they substituted the words ‘cold iron’.

Ominous spirits were often said to appear in the form of a black pig, and it was widely thought that the pig was the worst of all forms for fairy folk to take. However, harm could usually be avoided by ignoring the apparition completely and blessing oneself as one passed.  If that failed, a hazel stick was a good implement for warding off the spirit. Making for the nearest bridge on the road was another good idea, as it was well known that the animal spirits could not pass running water. Hallowe’en, when the barriers between this world and the otherworld are weakest, was a favourite time for the Black Pig to be abroad, so the wise did not travel alone on this night.

Along the southern border of Ulster, from Leitrim to Armagh, is a series of bank and ditch earthworks known in folklore as the ‘Black Pig’s Dyke’. According to legend these were formed when an ill-tempered schoolteacher was transformed into a black pig by one of his pupils who had got hold of a book of magic spells. In his rage, the transformed teacher ran through the countryside, carving out a trench with his tusks, and throwing up the earthworks beside it. In reality, the earthworks were probably constructed in Iron Age times to prevent cattle raiding.

There are several proverbs (‘seanfhocail’) connected with the pig. These include: ‘Tá cluasa fada ar mhuca beaga’ – little pigs have big ears; ‘Na muca ciúine a itheann an mhin’ – the silent pigs eat the meal (it is the quiet ones who do it); ‘Radharc na muice lá gaoithe’ – a pig’s sight on a windy day (i.e. an unfathomable ability – whatever is unexplained but true). ‘Ag cuimilt blonóige de thóin na muice meithe’ – rubbing lard onto the backside of a fat pig (i.e. laying it on thick, overdoing it). ‘Is iomaí slí muc a mharú seachas a thachtadh le h-im’ (There are many ways of killing a pig other than by choking it with butter, meaning: ‘There’s more than one way to do something’)

Pig-hunting appears in many Irish tales, especially of the Fianna. In one tale the Fianna hunted a great wild pig on the mountain of ‘Bearnas Mór’, and Fionn’s hound, Bran, got the better of it. When the pig began to scream a tall man came out of a nearby ‘sidhe’ (fairy fort) and asked Fionn to let it go. When Fionn agreed, the man struck the pig with a druid rod and it turned into a beautiful young woman called ‘Scáthach’ (shadowy one). The tall man invited the Fianna into the fort for a feast, and Fionn became so enamoured of the young woman that he asked the man (her father) for her hand in marriage.  The man agreed, and ‘Scáthach’ began to play the harp for the guests. She played so beautifully that Fionn and all the Fianna fell asleep. When they awoke they were outside on ‘Bearnas Mór’ and ‘Scáthach’ and her father were nowhere to be seen.

The pig and the pigsty featured in some old folk cures. If a child had the mumps he might be taken to the pigsty where his head was then rubbed to the pig’s back and prayers said, the hope being that the sickness would transfer to the animal.

Blood was always shed on St. Martin’s Eve (November 10). Very often the cock was killed, but in many places it was the hapless pig that was led to the slaughter.

There was an old custom that when a sow had bonhams she should be brought into the kitchen with her young and left there for ten days and nine nights. Fairy pigs were not as numerous as phantom dogs and demon cats, but they were not unknown. There is one tale of a man whose clock had stopped and who set out for the fair in the middle of the night in his donkey and cart. He had not travelled far when he met a fairy pig, and the brazen pig not only followed him, but even tried to get into the cart. A little further on was a bridge over a little stream, and the driver was confident that he would make his escape at the bridge for, as was believed, a fairy of any kind cannot cross over water. When they came to the bridge the pig had to undertake a detour through the fields but, unluckily or by the evil influence of the fairy pig, one of the wheels fell off the cart. By the time the wheel had been refitted, the pig had caught up and pursued the man once more. The driver was so terrified that he screamed at the owner of a house beside the road to open the door for him. The kind householder did as he was asked, whereupon the driver gave an athletic jump over a stone wall and hurried indoors.  The fairy pig was very disgruntled and vented his frustration by grunting outside the bedroom window for the rest of the night.

Pigs were often seen going in and out of forts (‘liosanna’), which would seem to indicate that the fairies were as fond of their bacon and cabbage as their human neighbours. Occasionally, pigs came out of rivers and streams and these too were enchanted. There was another tradition which proclaimed that the sow always had trouble giving birth because a pig put sods on Our Lord’s grave.

There are many old sayings which feature the pig. If a person was financially secure or ‘comfortably off’ to use the rural expression, he was said to be ‘lying in lavender like Paddy’s pig’. There was some good advice too for the lazy: ‘A man without initiative is no better than a pig’, but attempting the impossible would bring no rewards: ‘You can’t make a silk purse our of a sow’s ear’.

‘Caisearbháin’ (dandelions) and nettles were fed to pigs in the old days, when pigs were allowed free in a garden, unlike today when the poor creatures never see the sun, fattened as they are in large houses. The roots of comfrey, when boiled and mixed with the pig’s meal, provided an effective cure for swine fever. Those who lived near the sea used to wash their pigs with sea water if they suffered from cramp.

Ireland was once inhabited by wild pigs or hogs. The word ‘torc’ (a wild boar) is common in placenames, like Torc Mountain and Torc Waterfall, near Killarney. Kanturk in County Cork is ‘Ceann Toirc’ (the headland of the wild boar). ‘Ceann Toirc’ (Turkhead) is where I grew up, eight miles or so west of Skibbereen. However, Turkhead might derive from ‘Muc Mhara’ (porpoise), also known as the ‘tóithíneach’ in Irish.

Pigs are often spoken about in derogatory terms. One sometimes hears people being described as a ‘dirty pig’. The following poem by Galway Kinnell describes the beauty of a ‘céis mhuice’, a sow.

Saint Francis and the Sow

stands for all things,

even for those things that don’t flower,

for everything flowers, from within, of self-blessing;

though sometimes it is necessary

to reteach a thing its loveliness,

to put a hand on its brow

and retell it in words and in touch

until it flowers again from within, of self-blessing;

put his hand on the creased forehead

of the sow, and told her in words and in touch

blessings of earth on the sow, and the sow

began remembering all down her thick length,

from the earthen snout all the way

through the fodder and slops to the spiritual curl of the tail,

from the hard spininess spiked out from the spine

down through the great broken heart

to the sheer blue milken dreaminess spurting and shuddering

the long, perfect loveliness of sow.

Mon Oct 3 , 2022
The new environmental schemes ACRES (Agri Climate Rural Environment Scheme) was introduced with much fanfare earlier this year but the shine has faded, as farmers are left disappointed when they see the options available. Achieving the headline figures of over €7,000 seems out of reach to many farmers as either […] 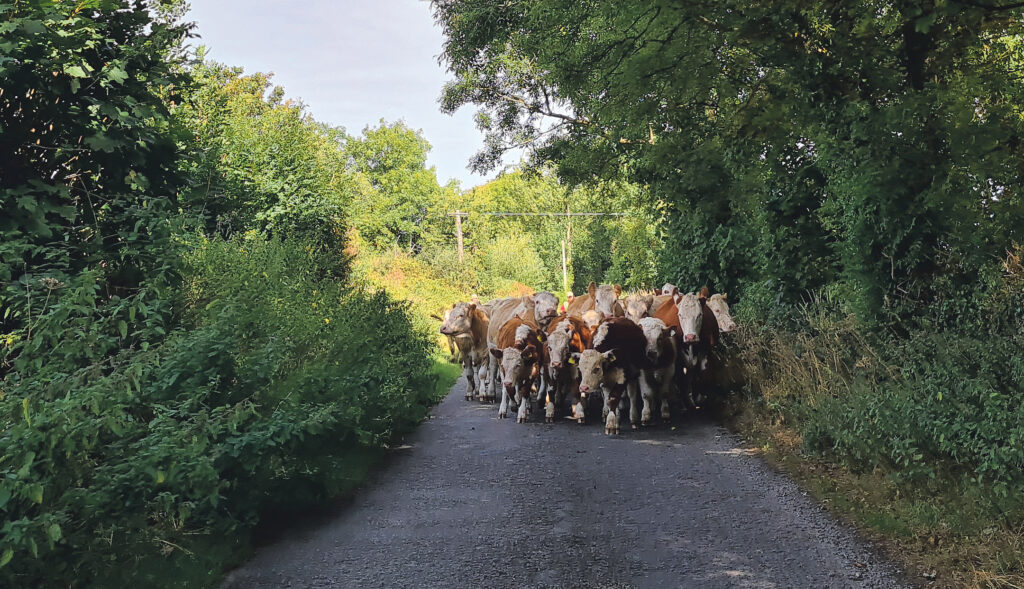