The ‘Cailleach Bhéara’ (Hag of Beara) is a mythical old woman in Irish literature and folklore, associated with west Munster, but especially with the Beara Peninsula in West Cork.  Originally her name was ‘Boí’, a variant of the word for a cow, ‘bó’,  At the tip of the Beara Peninsula is ‘Oileán Baoi’ (Boi Island), today known as Dursey Island.

Undoubtedly first a goddess, she is featured in a poem of AD 900, where she is an old woman lamenting the loss of her youth, and she remained celebrated in both oral and written traditions up through the 20th century. Somewhat sinister but wise, she came to be thought of as a nun in early Christian times. The word ‘cailleach’ comes from the Latin for a veil, ‘pallium’. But she also speaks of having many lovers,  children, foster-children, as well as grandchildren. She never relates Christian wisdom.

The personification of the power and authority of a kingdom, as a woman to be won  sexually, predates literature written in any Celtic language. According to the conventionalised steps in the story, the would-be king encounters an ugly hag who invites him to have intimate relations with her. Her repulsiveness, perhaps a metaphor for the responsibilities of both kingship and adulthood, initially puts him off, but he eventually relents. On the morning after their lovemaking, the hag is transformed into a beautiful maiden.

The ‘Cailleach Bhéara’ is thought to have taken many lovers, including the ferocious Fenian warrior ‘Fothad Donainne’. Later she was linked to landforms and attributed with powers that transformed animals into standing stones surviving from Neolithic times. In Gaelic Scotland, where she was known as ‘Cailleach Bheur’, she had a blue face as the daughter of the pale winter sun and became a female spirit of the wilderness and the protector of wild animals. In Ireland citations of her age became proverbial, so that when people reached very advanced years they were said to be ‘as old as the ‘Cailleach Bhéara’’. In her lamented lost loves, her crabbed promises of sovereignty to fearful but aspiring princes and her extreme longevity, she became an embodiment of human disappointment, like us in everything but mortality.

In the folklore of Connacht, Ulster and north Leinster, the Hag of Beara was closely associated with corn and harvesting. There was widespread allusion to a hag (cailleach) as spirit of the harvest, which was said to race from the reaper’s scythe in the form of a small animal, especially that of a hare.

A man who could work as fast as a racing hare would, of course, be a phenomenal fast reaper, and so the idea could develop of a contest between a reaper and the ‘Cailleach Bhéara’. One story tells how one year she had a huge field of corn and that she issued a challenge to all and sundry to engage in a reaping contest with her. Every man who took up the challenge was defeated by her in the reaping race and had his legs cut from under him by a stroke of her sickle or scythe. Eventually, a wily man discovered that she had a black beetle hidden in the handle of her implement, and realising that this was a magical device to give her great speed, he killed the beetle and  defeated her in a contest. She then revealed to him her great age and told him some details from her life, which contains some accounts of her love affairs when young.

Mancán Magan, in ‘Thirty Two Words for Field’, tells us that in mythology the ‘Cailleach’ was the personification of winter and that her veil may have represented the land being covered with frost and snow. In parts of Ireland her method for hastening winter to come was flying and beating back the summer vegetation with a cudgel, known as a ‘forca’.

‘Cailleach’ has another range of meaning stemming from her role as guardian of herbs and food stores, especially during the winter. ‘Cailleach’ can refer to a little alcove in the kitchen for storing your pipe, knitting, matches, rosary beads, etc. It can refer to a snug in a public house which was a little room hidden from the main bar, where ladies or others, such as a priest or a private gentleman, could have a drink. ‘Cailleach’ was an anchor made of stone, usually at the end of a  fishing net. The old fishermen of Cape Clear were well used to the word in this sense.

As the ‘Cailleach’ was often portrayed as somewhat sinister – black-clad, veiled and otherworldly, the owl was often called the ‘cailleach oiche’ (night witch). An alternative name for the cormorant is the ‘cailleach dhubh’. The egg case of a small shark, dogfish or skate, is known as ‘sparán na caillí mairbhe’ (the purse of a dead witch). A great long sleep can be called (the sleep of the old woman of Beara).

Mon Jul 5 , 2021
Christian Aid Ireland has thanked the people of West Cork for their support for the fundraising efforts of a Carrigaline clergyman who recently completed a sponsored walk around County Cork, raising more than €11,000 for the agency’s work in Burundi, a country affected by poverty, hunger and conflict. Rev Tony […] 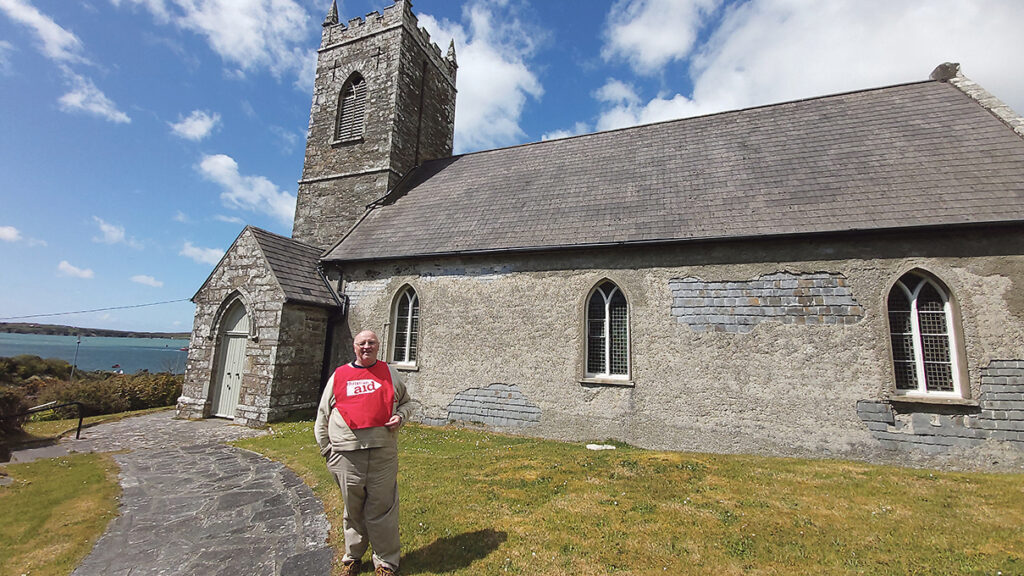