When we first came to the village to view the house that would become our home, I was shocked to see a little boy of around six standing on the side of the road. I was about to stop and ask if he was lost when an even smaller boy clambered up the bank pulling a puppy on a bit of string. They both stood and gaily waved, clearly out playing with no fear of any traffic.

After we bought the house, my youngest daughters went to the local National School (48 children in two rooms) which was about half a mile up the road. Like most of the other children, they walked to school. The village proper is about a mile away. Between our house and the village were two houses and the school. Today that stretch of road has a dozen houses. The boom brought growth, but it has been the recovery from the bust that has seen my little patch change the most. Not only on our road, but on all the roads in every townland, new houses have sprung up, along with small estates. Though I am not a fan of the suburbanisation of the countryside, I can’t begrudge the families who have come and made West Cork their home as I did so many years ago. What I do begrudge is the increase in traffic. Not only has the number of cars increased dramatically, so has their size and speed.

Though the school is doing well, hardly any children walk to and from home. That is a real shame, as it steals what was an important milestone in a child’s development. That walk to and from school on your own was a chance to dream, to feel adventurous, to mess about with your schoolmates. A few children still walk to school from the village, but they are mainly accompanied by adults, who are ever vigilant to the massive SUVs that come and go on the school run.

It may seem that all the media focus on walking and biking is a new-fangled ‘woke’ notion that flourished during the pandemic but that is not so. I remember reading Alice Taylor’s account of how her husband would ride his bicycle from Innishannon to Cork city for secondary school. The traffic was so light that he equipped his bike with a small ledge so that he could clip a book onto the handlebars and read during his journey.

The Free Bus Scheme provides transportation for primary school students who live at least 3.2km away (4.8km for secondary school). This is because it is considered that living two miles from a school is close enough for a child to walk or bike to. The battalion of cars waiting at the end of the school day clearly indicates that most children are being driven rather than walking to school. There are many reasons why parents no longer let their children walk to school. Some are worried about the dangerous traffic. The irony is that the traffic caused by the school run increases the danger on the road. This in turn leads to less children walking alone to and from school. I also know that in two-income families, the need to get everyone out of the house and to school or work on time makes walking a non-starter in a modern family’s busy schedule. Still, it saddens me to think that these children will never know the joy of meandering back home along a safe boreen, taking the time to daydream, investigate the hedgerows, and appreciate nature on their own. I wonder if parents might consider letting their children walk to school again, or if the idea of an eight-year-old wandering the countryside has become totally alien.

There is also a bigger picture to consider. Ireland is legally required to reduce emissions by 51 per cent by 2030. Though emissions dropped significantly during lockdown, they rose by 20 per cent in the first quarter of this year, making Ireland the third highest in the EU behind Bulgaria and Malta. The rest of Europe has remained below pre-covid 2019 levels and The Netherlands and Finland dropped in the first quarter.

Much is made about the farming sector’s contribution to greenhouse gases, but farmers did not increase production in the first quarter of 2022. What did change was the number of people driving to work, to school, on day trips and shopping excursions compared to during lockdown. Car dependency is a huge contributor to greenhouse gases in Ireland. But what choice do we have? I can’t get to the petrol station for a shop, much less go into town without using my car. I could walk, but that would take a good chunk out of my day. I’d also be putting my life on the line as not only have the number of cars increased – so has their speed. Which brings me to my last point.

Hardly a day goes by when I am not nearly run into the ditch by a large vehicle moving way too fast in the middle of the road. I know that it is customary to drive more or less in the middle of a boreen, but it is also customary to drive slowly, beep before a blind bend, and then slow down – or even stop all together – when you see another vehicle approaching in the opposite direction. Country people know these unspoken rules of the road that help keep us safe and our vehicles unscratched. It seems to me that some of our new arrivals do not. I propose that we put together a pamphlet for people moving into rural areas to help them drive the backroads and boreens. It could be called ‘Slow Down and Mind the Ditch!’ and should be mandatory for anyone who rents or buys a house in the countryside. And while we’re at it, it could encourage parents to let their children walk to school…

Why has Bantry Credit Union’s purchase of the town’s Bank of Ireland building struck such a chord with the public?

Mon Sep 5 , 2022
Finbarr O’Shea QFA Manager, Bantry Credit Union  Charlie Weston, Personal Finance Editor with the Irish Independent, phoned me Thursday morning a few weeks ago. He had seen the story in The Southern Star on Bantry Credit Union’s purchase of the Bank of Ireland building right next door to us.  Describing […] 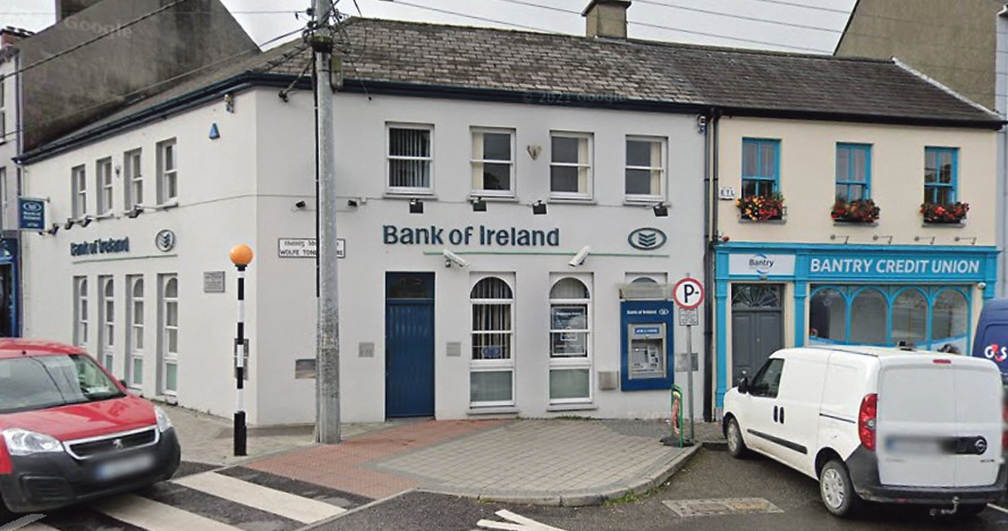