On November 25, 1975, Francis Crossan, a 34-year-old father of two children and a Catholic from Belfast with no affiliation to any paramilitary organisations, became the first civilian to have his throat cut by the Shankill Butchers. During the most provocative times of the Troubles, he became the first of many to die so viciously at the hands of this feared gang.

The Shankill Butchers, a gang of 12 men, operated for seven years, between the years 1975-1982. Their leader Lenny Murphy is known to have had a seething hatred of Catholics and is quoted as describing them as ‘scum’ and ‘animals’ on many occasions. Born in Shankill in 1952, Lenny was 16-years-old when he joined the UVF and age 20 when he was first charged with  the crime of murder. It is believed that Mervin Connor and Lenny Murphy carried out the murder of 32-year-old protestant William Pavis on the orders of the UVF who were convinced Pavis was selling weapons to the IRA. Although there were two witnesses who said they saw Lenny Murphy pull the trigger in broad daylight and he was also picked out from an identification line up while in police custody, not long after, Mervin Connor died in an apparent suicide. It is believed the note he left admitting to the murder was written under duress. Nonetheless, the case went to trial and Lenny Murphy was acquitted of the murder. After his release, Murphy was immediately rearrested and jailed for two years due to various escape attempts while incarcerated. It was the first of many murders that Murphy was accused of, or involved in, and the first of many stints in jail.

Upon his release, not wanting to be governed by the rules and regulations of the UVF, Murphy went about setting up his own paramilitary organisation, recruiting three other individuals with the same deep-rooted hatred of Catholics as himself.

Robert ‘Basher’ Bates (25), Sam McAllister (20), and William Moore (25) all had substantial criminal records. William Moore drove a black taxi and had previously worked as a meat packer, which gave the men access to a set of butcher’s knives and meat cleavers, repeatedly used in future killings. While other men passed through the organisation, these three were Murphys’ trusted inner circle.

The very first victims of the Butchers met their fate on October 2, 1975; two men, two women, shot dead in a robbery. One month later, the first victim to be killed viciously by knife was the aforementioned Francis Crossan. The killings continued in this same manner for years. Armed with cleavers and axes, the Shankill Butchers roamed the streets of Belfast looking for random Catholic victims to torture and kill.

In the mid-seventies, security forces were stretched to breaking point by the high profile actions of republican and loyalist paramilitary gangs, and so were perceived to have turned a blind eye. Though many members of the gang were said to be members of the UVF, targeting innocent Catholics, the group also turned on their own at times, killing Protestants mistaken for Catholics.

Thomas Quinn (55) was their next victim. The account of the woman who found the body of Thomas Quinn became vital, as she mentioned that she had heard the sound of a heavy diesel engine similar to that of a black taxi.

Just three days after killing Thomas Quinn, the Shankill Butchers shot dead protestants Archilbald Hannah and Raymond Carlisle – who they mistakenly took for Catholics – while they were sitting in a lorry on their way to work.

Just two weeks later, Francis Rice (24) had his throat slashed from ear to ear by the Butchers, in an almost identical killing to Thomas Quinn. it was after this murder that the media christened the gang the ‘Shankill Butchers’

On March 11, 1976, there was finally a break in the case when two Catholic women were shot at from a passing car in Belfast. While the gunman abandoned the vehicle and fled, a witness reported that they had seen someone acting suspiciously at the scene. After finding a gun, the police placed the street under surveillance, which led to the arrest of Lenny Murphy on his return for the gun. He was sentenced to 12 years in prison for possession of a firearm with intent to kill but ordered his accomplices to continue with the ‘cut-throat’ murders. Three more Catholic men from north Belfast, Stephen McCann (21), Joseph Morrissey (52) and Francis Cassidy (43), were subsequently kidnapped, tortured and hacked to death between 1976 and 77.

However it was the killing of Ted McQuade, which led the police in the direction of the black cabs once again. Ted and his wife were walking home from a party when a car pulled up alongside them. She six times, Ted died instantly. When interviewed by police, McQuade’s wife said the men fled the scene in a black taxi. Although met with a wall of silence from the terrified residents of Shankill, the police had enough identifications of black taxis to conclude that the killings were linked and went on to search all 700 black taxis in Belfast. Although William Moore’s taxi – the vehicle the Butchers used to carry out the murders – was forensically examined, nothing was found. After Murphy ordered the cab destroyed, Moore replaced it with a yellow Ford Cortina, which was used in subsequent attacks. With the huge media attention, it was no wonder that people were so terrified they ran away from black cabs in Belfast.

Although Loyalist leaders called Lenny Murphy a ‘bloody psychopath’, they did not want to intervene for fear of revenge attacks. The police also knew Murphy was the leader of the gang but did not have proof.

On May 10, 1977, the investigation changed course when one of the Butchers’ victims, Gerard McLaverty, was found alive in an alleyway after being beaten, stabbed and with his wrists cut. The detective in charge of the case, Jimmy Nesbitt, came up with the idea to disguise McLaverty, who was recovering from his injuries a week later, and drive him the same route taken on the night of his attack. Unbelievablly, McLavery was able to identify Sam McAllister and Benjamin ‘Pretty Boy’ Edwards. He recalled that hat McAllister had rolled up his sleeves during the attack and revealed gunshot wounds on his arms. On the basis of this, McAllister was arrested. As well as the scars on his arms, the police found a six inch steak knife and two 10 inch boning knives under the floor boards.

McLaverty also described one of the other attackers and mentioned the car he was taken away in was a yellow Ford Cortina., which fit the bill of William Moore. After Moore’s car was searched and traces of McLaverty’s clothing found in his car, he was interrogated and eventually confessed to being present at all of the cut-throat killings. He said, “Murphy done the first three and I done the rest.” The Butchers – the most prolific serial killers in British history – had been caught.

McLaverty also admitted that Murphy was giving him the orders from prison. In the end, Lenny Murphy’s three main henchmen, as well as eight others all confessed to the 19 murders of the Shankill Butchers, although it is suspected that there might have been more victims.

In February 1979, the 11 men were sentenced to a total of 2000 years in jail. However, Lenny Murphy, who escaped conviction, was released from prison three years later. Just 24 hours after his release, Murphy beat to death a protestant man with special needs. He immediately began recruiting for a new gang of Shankill Butchers. Not long after this, Murphy violently killed a Catholic man named Joseph Duggan, The body was dumped behind Murphy’s house, who was arrested but released due to a lack of evidence.

Unstable and out of control, the IRA saw Murphy as a liability and ordered his execution. On November 16, 1982, shot more than 20 times, Murphy was killed by the IRA in Glencar, in the same estate where many of the Shankill Butchers’ victims were found.

Lenny Murphy’s mother Joyce always maintained her son’s innocence and Murphy was given a paramilitary funeral to which thousands of loyalists attended as well as some politicians. The remaining members of the Shankill Butchers were all released under the terms of the Good Friday Agreement, as part of the peacemaking process in Northern Ireland.

The moon in Irish folklore

Mon Sep 5 , 2022
The ever-changing moon was an object of mystery and superstition in ancient Ireland. The old Celtic druids placed great emphasis on the moon and arranged their calendar by it. It was believed that any work or business undertaken when the moon was growing (waxing) would be successful. Work begun when […] 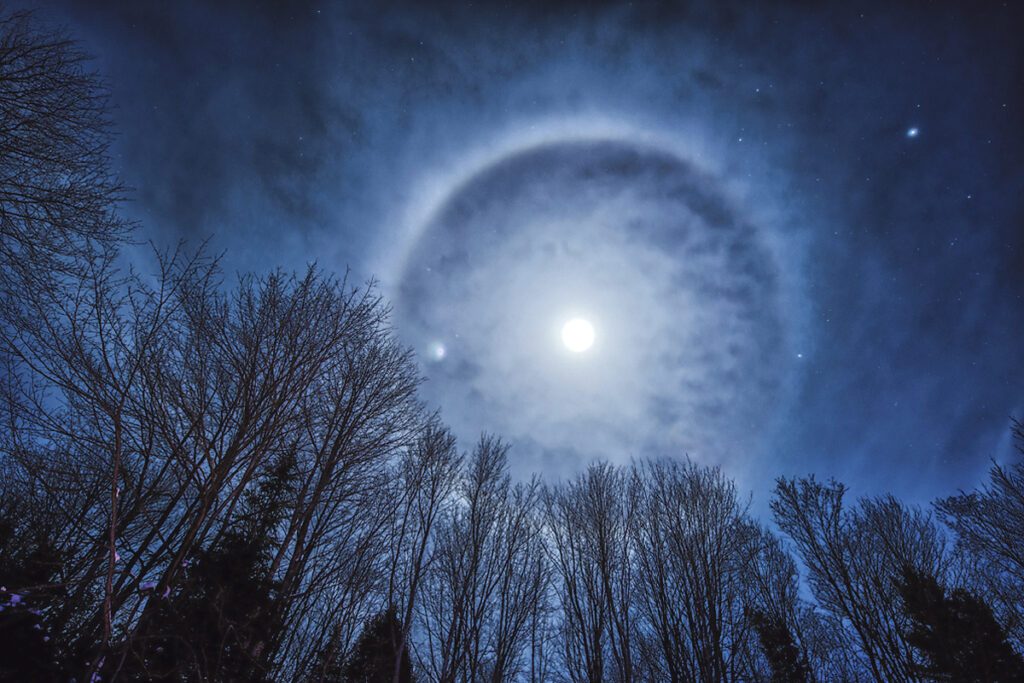