Far from being the expensive dish we know it as today, in the 17th century lobster was viewed as a disgusting, shameful food, only to be consumed by the poorest of the poor. Shane Daly shares the history behind this contemptible reputation.

In a previous article titled ‘Caribbean Credit Union’, I mentioned how Irish people lived and worked in the Caribbean as indentured servants (one who lives and works in slave-like conditions for a set period of time, usually to pay off a debt) in the 1600s. The Irish were also indentured servants to the British in America, specifically, North America, in what is now Boston Massachusetts. So where does lobster and its connection to the Irish come in to all this?

With Ireland being a pretty grim place to live in the 17th century, many Irish jumped at the opportunity to escape the harsh conditions of their homeland and travel to the colonies the British had created by taking land away from the native American people in North America. The British needed free labour for these colonies to function post-production and in order to maximise profits. In this case, the Irish volunteered to go: their labour was given in exchange for their passage paid by the British, the debt to be paid off usually over a period of between seven and 10 years.

This is where lobster comes into it.

While the Irish labour in their colonies was free, these indentured servants working 16-hour days, also had to be fed. The British, in order to maximise profits, needed a cheap, abundant and readily-available foodstuff to feed all these workers. In Massachusetts at the time, this was lobster.

The Massachusetts colony was located on a bay where enormous heaps of lobster washed ashore every day. Prior to the British colonisation, this abundance of lobster meant it was used as fertiliser by the Native Americans.

In the 1600s the British considered lobster – the name comes from an Anglo-Saxon word meaning spider – a disgusting food that only vermin ate.

Their contempt for the Catholic-Irish meant that the staunchly Protestant British were only too happy to serve them lobster. In fact the Irish were fed so much of it that a group assembled and organised a rebellion, of which the sole purpose was to draw attention to the fact that they no longer wanted to eat lobster.

An agreement was reached with a piece of legislation drawn up stating that the Irish people could not be served lobster more than three times a week and that their diet had to be supplemented by other foods.

Today we regard lobster as a delicious and refined food, so why was it held in such contempt in the past. One theory is that the lobster was washing up on the shore dead, where the British collected it, sometimes in numbers reaching into the 1000s. Somewhere along the line, someone realised that if you boiled the lobster alive, the meat had an entirely different flavour.

Despite this realisation, lobster found it difficult to shake off its shameful history. This continued to be the case for hundreds of years. A quote from the time states ‘Lobster shells about a house are looked upon as signs of poverty and degradation’.

So how did lobster go from this to becoming a signifier of class and sophistication in the 21st century. Basic economics means the less there is of something the more expensive it becomes. However, we cannot say any of those things about lobster. We have loads of it!

It is the manufactured exclusivity of lobster and the ritual of suffering that the animal endures in order for us to eat it that makes lobster seem exclusive and gives an illusion of grandeur. Foie gras, veal and ortolan, the tiny African songbird (the saddest story of all), are also regarded as expensive and exclusive foodstuffs in the 21st century: All promote cruel suffering in animals.

Mon Feb 7 , 2022
Local Enterprise Week 2022 with the LEO Cork North and West, promises to be an exciting week this March (7-11). The team at the LEO is busy planning a schedule of training and events for clients across all sectors, whether they are at start-up or an established, growing stage. Training […] 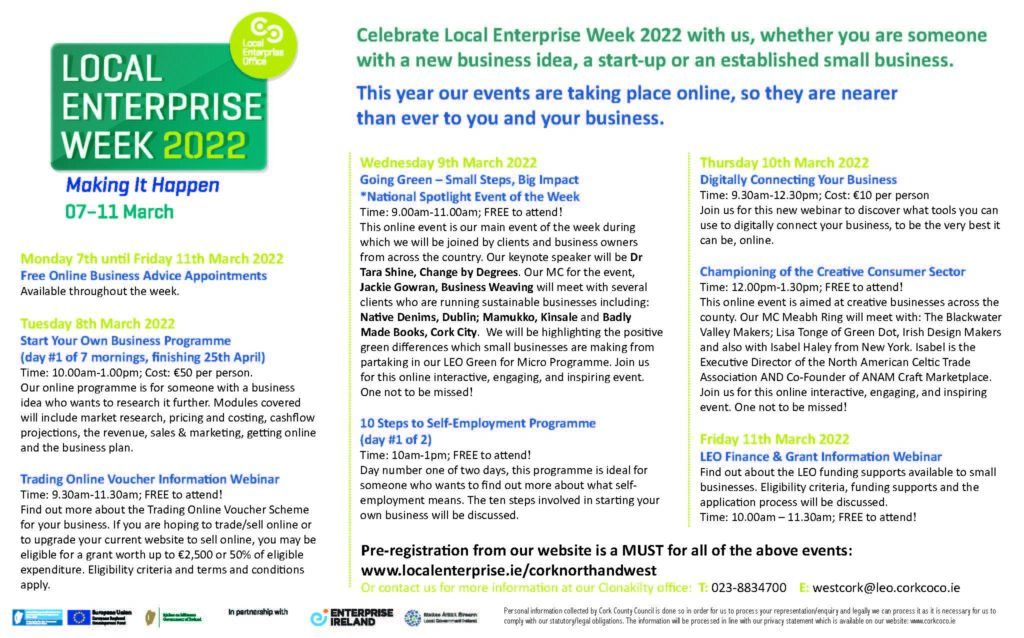