Some of the broader aspects of the next CAP were announced by the Taoiseach and Minister for Agriculture Charlie McConalouge ahead of the October bank holiday. It offered some bit of clarity and came days after the details of carbon budgets, which are targeting emission cuts in the region of 21 to 30 per cent from agriculture.

Taking a quick look through the CAP changes, eco-schemes are a new element and will be funded via a 25 per cent use of what was known as the BPS (Basic Payment System). The new payment is likely to be in the region of €64/ha paid on compliance with participating in the eco-schemes available. There is front loading of payments on the first 30ha and this is expected to be in the region of €44/ha.

Convergence has been set at 85 per cent, which will see payments move closer to the national average, this will result in small increases or large falls depending on which side of the average a farmer’s payment has been on up to now. The top level of payments will now be capped at €66,000 which will take a lot of adapting to, particularly in farms that were accustomed to large payments.

The flagship environmental scheme is split in two. It is envisaged that farmers will have a choice of two options. The five year scheme will have room for up to 50,000 farmers and is a replacement for both GLAS and the REAP scheme. The department has set a target of 20,000 farmers in the first section of the scheme, this is targeted at getting farmers to work with other farmers in their area to deliver a wider environmental good. This is similar to some of the locally-led environmental schemes. The money is enticing with funding of a maximum of €10,000 available for this. The average payment here is expected to be around €7,400. The second environmental option is targeting 30,000 farmers and will be on an individual basis, an average payment of €5,000 is likely here with a maximum of €7,000 available for those who comply with all the environmental conditions.

Farmers have been concerned with the level of policy coming their way and a crowd of up to 3,500 showed up at an IFA protest in Cork City in mid-October to make their voices heard. The uncertainty up until then and the fact it was an evening protest helped draw in the crowd. It will be interesting to see if the mood among farmers stays united, as details of CAP and its winners and losers emerge.

Back on the farm the last of the cows were scanned, so the picture regarding next spring and the upcoming winter is becoming clear. Any older cows not in calf will be moved on before the year is out while the younger ones will go to grass next spring to put on a bit more size. There is going to be fewer calving in 2022 compared to this year but I’m happy with the results, as most cows held to their first service, which is a good sign of them.

With TB testing in November, I’m considering holding the rest of weaning until that is completed. Having less groups would make the yard work easier on the day and there’s no point adding extra stresses to cows and calves. Most of the calves will be housed by the time it comes around though. The majority of the cattle are very easy to deal with but there’s a few outliers, as I experienced one Sunday morning recently. I had everything organised so I could take the day easy, a walk through stock at grass and give some ration to a few indoors. I could have a lie in and be off the farm for 9am. That was the plan. One young bull was off form the previous evening but nothing to warrant closer inspection. He seemed poorer the next morning so I said I’d bring them in and deal with him. It was about quarter to nine when I went about rounding them up. Ten past one, I left the yard. The animal in question and one other decided a visit to the yard wasn’t on their schedule for the day so patience and lots of it were required. I had all the other animals in the group sorted in half an hour with the exception of this pair. In the end, time and a few old school tricks such as letting an older cow out the field to coax them in won the day.

Stock like that can be the difference in making tasks enjoyable or torture. I’ve been putting an effort into avoiding days over the last few years and the time wasted that morning strengthened my resolve to continue doing so. On a share of farms the cattle’s temperament will have a say on whether there will be a successor there or not. It’s not always financial reasons that keep farms alive through generations and with much more options available to young people, making the farm experience a bit more enjoyable is worth considering.

Tue Nov 2 , 2021
Describe the farm? Ronald: We’re Lisavaird co-op milk suppliers with the milk going to Carbery. My father used to supply winter milk to Carbery on a Baileys Crème Liqueur contract in the late 70s and 80s and then when that finished we were supplying Milltown farm for a while. Around […] 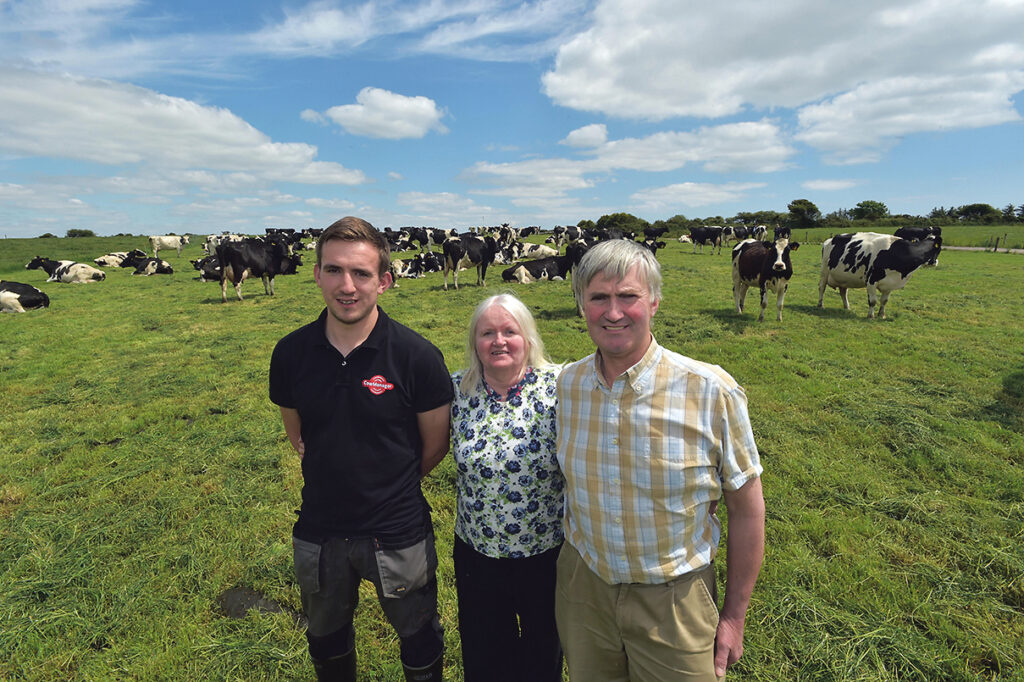