Bealtaine gets its name from the Celtic god, Bel, god of Light, Fire and Fulfilment, who may be traced back to the Middle Eastern god Ball. ‘Ball Tine’ (the fire of Ball), is the derivation of the month’s name in Irish. A fire was kindled in his honour, and cattle were driven between two fires as a safeguard against disease. In Irish we have the expression : ‘táim idir dhá thine Bealtaine’, (I’m between two fires of May), meaning ‘I’m between two minds’, unsure, in a dilemma. May Day was symbolic of a return to life, of the defeat of the hard winter, with new hopes for good planting and rich harvests. Bealtaine was the time for milk and honey, the primary time of pleasure, of blossoming and blooming, of desire and satisfaction, so the cow and the bee were both significant symbols for this celebration. The cow’s miraculous ability to create milk and the bee’s creation of honey, the sweetest food on earth, were absolutely magical. In parts of Cork and Kerry, the first Sunday in May was named ‘Domhnach na hEadraí’, (Cow-time Sunday) because it was on this day that the cows were left out to pasture after the winter.

May Day was a ‘gale day’ when the Irish farmer’s tenancy began or ended, on which a half year’s rent must be paid to the landlord. Failure to pay the rent sometimes meant eviction, depending on the landlord or his agent’s whim. The letting of grazing or meadows usually dated from May 1 and farm servants and workmen were hired at this time

There were more piseogs (or superstitions) connected with May Day than any other day of the year. Nobody would loan or give anything away on this day, and anybody who asked for such was believed to be trying to steal his neighbour’s good luck. Among the fishermen of the islands of Roaringwater Bay, nobody would ask for the loan of a match, tea, sugar or anything, not even the time of day. If they did, they were suspected of trying to steal the boat’s luck. In general, the rule for the day was ‘no spending, no lending, no borrowing’.

The first water taken from a well after dawn on May Day was considered lucky. It was known variously as ‘the top of the well’, ‘the luck of the well’ or ‘barra-bua an tobair’. A story is told of a woman in Cape Clear rising very early to ensure she would be the first to draw water from a particular well; however, she fell asleep and a neighbour beat her to it.

Piseogs were especially strong regarding matters which involved no certainty such as milk, hay, crops and fishing. The dew on the grass in the morning has long been a symbol of agricultural prosperity. It was often gathered and kept as a medicine or aid to beauty. The young woman who washed her face in the dew on May morning gained a fair complexion, while if she were daring enough to undress and roll naked in the dew she was given great beauty of person.

The principal customs were those which welcomed the summer. The picking and bringing home of wild flowers was common, those in bloom at this time of year being mostly yellow – primroses, buttercups, marigolds, furze-blossom. The children usually made posies of the flowers, small bouquets, which they hung up in the house or laid on the doorsteps or window-sills. In West Cork, instead of flowers, people used to (and some still do), collect leaves of the wild iris, (liostrum, or feileastrum), which were hung on the door, or placed on the window-sill or dresser. In most parts of Munster, it was more usual to pick and bring in ‘May boughs’, small branches of newly leafed trees, hazel, elder, rowan, ash, and particularly in Co. Cork., the sycamore, often called the ‘summer tree’. Different growths were believed to be lucky or unlucky, varying from place to place. Blackthorn, elder, woodbine, furze, alder and whitethorn particularly, were considered unlucky, but this varied from place to place.

In the Roman Catholic Church, the month of May is dedicated to the Virgin Mary. Many families make a ‘May altar’ in their homes with a statue of the Blessed Virgin Mary adorned with vasefuls of fresh wild or garden flowers. The Roman flower festival of Floralia was instituted in Rome in 283 BC and was celebrated from April 28 to May 3 in honour of Flora, goddess of flowers and vegetation. This Roman festival was introduced into Britain and juxtaposed over the old Celtic fire festival of Bealtaine. The Christian devotion to Mary was juxtaposed over this, so many of our customs show a continuity from pre-Christian times to today.

West Cork teenagers speak out to make a difference

Tue May 4 , 2021
Teenagers across Ireland, including students from West Cork, spoke out in April on the issues impacting them and shared their innovative ideas for change with the help of a new digital platform created by Young Social Innovators as part of the YSI Speak Out Virtual Tour. Students from Coláiste na […] 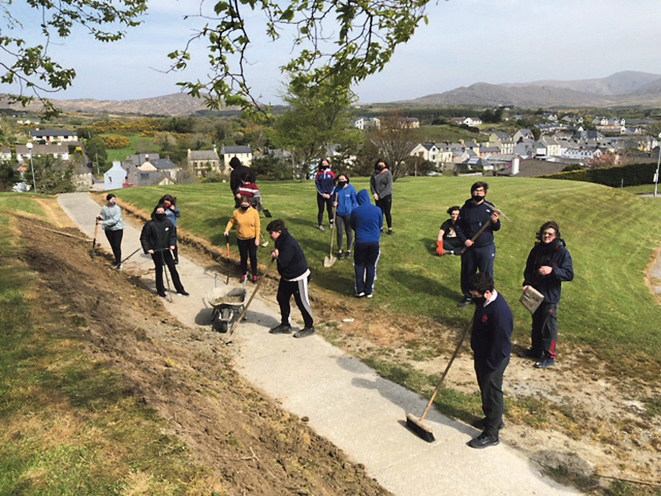