In the last few weeks we have seen the devastating advance of the Taliban resulting in the collapse of a USA-backed Afghan government. They had been in power for twenty years. The speed of the military penetration was akin to the Nazi blitz of France in World War Two, in which French, Dutch, Polish and Belgian troops capitulated totally within a mere six weeks. The aforementioned countries knew only too well that Hitler’s forces were massing on their borders, yet still were helpless to prevent an invasion. The Afghan government also knew that the Taliban were waiting in the wings, yet there was an inevitable feeling that they were doomed to defeat before a shot was fired.

When the Americans released their roadmap for quitting the country, the Taliban pounced. A highly trained Afghan army with a massive military budget melted in the face of their foe’s advancement. Students of 17th century Ireland would know Cromwell’s troops had similar effects on their foe, many of who surrendered without a fight knowing how brutal Cromwell’s Model Army had been on towns and cities and people that dared to resist them. The fear of Taliban brutality was enough for many soldiers to lay down their arms. It’s still in living memory what they did when last in power, culminating in hundreds of public executions on a regular basis. Now the people of Afghanistan face an uncertain and oppressive future. This has been central in much of the coverage.

I want to take the conversation in another direction and ask how did it come to this in the first place? It won’t come as a surprise to many with an interest in history or who have followed this column that the seeds of this conflict germinated from western interference. To the west, the Taliban represent an ultra-extreme form of Islam. To the Taliban and their supporters, it is simply the purest form of Islam and we in the west are the Godless, decadent, sinful infidels.  Now don’t think for one moment that I am defending them – they had an appalling record when they ruled with an iron fist, particularly against women – but are we so blind here not to realise this has been created by centuries of western colonisation, control, exploitation, and manipulation? When a nation has been trod on for centuries, it radicalises the oppressed. They become the complete antithesis of what the colonisers or west represents. The values the colonisers bring: (a type of) democracy, freedom of speech, of free religion that are seen as characteristics of the enemy.

One of the stories that emerged on the radio is that the Taliban are not even Afghans. We were told, ‘They are a foreign people, an invading force’. This is the same kind of propaganda the IRA peddled about Black and Tans coming from the jails of Britain, when in reality they were demobilised World War One veterans. It’s a way to blacken your foe (not that the Tans needed much help in that department or the Taliban for that matter either!) The point is that many of the younger Taliban fighters spent their formative refugee camps inside the borders of Pakistan. In these primitive and hellish conditions, they were radicalised. Would you blame them? Living in cesspits, as a result of western interference, they were displaced by wars and battles from foreign powers in recent years against the US and their allies. These young men were homeless, had no identity and a crushed culture. The only thing they had in common was Islam. It became the only thing they had left. Their hatred found fertile ground inside these camps to bloom. Their father’s generation had to fight against the Soviet Union invasion from 1979-89. Another lost generation. Three times, the British invaded Afghanistan, twice in the 19th century and also a year after World War One, which seems ironic given that the British had involved themselves in the Great War, ‘to protect the freedom of little Belgium’. Every invasion was for British self-interests: for control of trade routes, the opium trade and most importantly, their geo-politic attempts to strengthen their hand to protect their jewel in their empire – India. The Afghans have had to fight off Alexander the Great and then, the Mughal Empire, who also possessed most of India, Mongolia, as well as Afghanistan in the 16th and 17th centuries. If you are getting mind-boggled by this list, imagine how devastating it has been for the natives who have been trodden on for centuries.

Another western lens that forms our world view is that, somehow, Muslim countries where Islam is the cornerstone of society, is something that is to be discouraged or be suspicious of. Lest we not forget, most western societies were church/state institution until the French revolution of 1789. Ireland was a Catholic run country up until a generation ago. In the scale of things, secular states have only been around for a blink of an eye, metaphorically speaking, since the dawn of civilisation. Again, I am not inferring any radical form of religion is right, especially one that propels women back to the dark ages. Far from it! What I am saying is that Islamic countries automatically create a natural suspicion in many westerners for upholding what is perceived as a sort of out-dated way of life. However, for millions of people, from Turkey to Dubai, from the suburbs of Marseille to the Balkan beaches, it’s a legitimate way to live one’s life. For a lot of Muslims living in those parts of the world, it works well for them. Yet take a place like Afghanistan and suppress it for centuries and what emerges is a form of intolerant, religious fanaticism that crushes our many other freedoms that as humans we are entitled too.

The Soviet invasion in 1979 is case in point and, for many historians, the starting point for the current upheaval. Afghanistan became a pawn in the Cold War, when the Soviet Union and the USA, vied for global control. It even affected the 1980 Olympics when the USA boycotted the games, which were held in Moscow that year.  While the States did not go into theatre of war in Afghanistan, (They were still smarting from their defeat in Vietnam a mere seven years earlier) they did arm Afghan rebels. Who did they choose to arm? Islamic fundamentalists.  The CIA aided Pakistani leader Mohammad Zia ul Haq to supply and train the Islamic rebels, which would be later called the ‘Mujahedeen, literally ‘soldiers of God’. Ten years of hard fighting by this force culminated in Soviet withdrawal from the region in 1989. Of course, the west made sure to install a western friendly government. But what of the Mujahedeen? What of their country and religion? It didn’t go away! These people took on other names or formed other groups like the Taliban. Only when one of these Islamic fundamentalist groups struck America on that infamous day of September 11 did the USA decide to invade Afghanistan and displace the Taliban who had ruled, unmolested, for a decade. And so here we are again. Back to square one. A ruined country – abandoned and crushed. Divided between moderate Muslims and fundamentalists, western and eastern cultures, Sharia law and human rights laws. It will fester for another decade until it becomes relevant to a great ‘superpower’ again. My guess is it will be China creating a ticking time bomb by incarcerating millions of Uighur Muslims within Chinese territories, for ‘re-education.’ We only know too well that the best way to create terror is to crush a people, take their voice, leaving them little option but to fight.

The Taliban, rightly so, are portrayed as a dangerous regime who will kill, suppress and impose a form of Islam that will take away the basic rights of women and men. Take a bow ‘the west’. Your Frankenstein’s monster has come back to haunt you. And if history is anything to go by, it will never go away.

The tale behind the image

Mon Sep 6 , 2021
The War of Independence work ‘Men of the South’ by Sean Keating hangs in Cork’s Crawford gallery and is described in gallery literature as “a painting that is not about the grime and pain of war, but about the idealism and patriotism behind it”. One hundred years since the painting […] 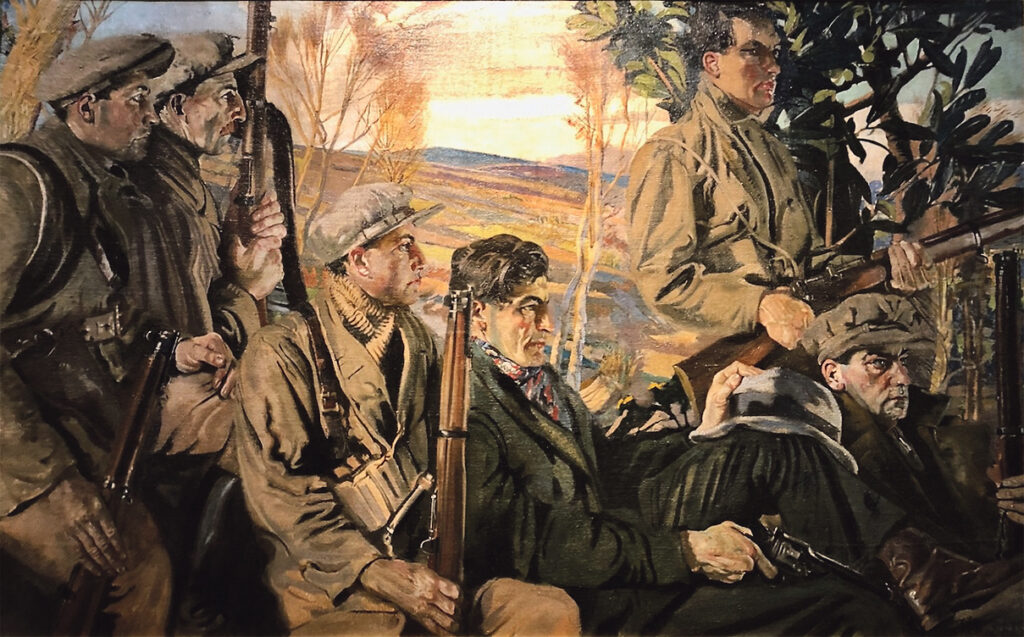