Each month I am grateful to have an opportunity to ‘write’ an article about history for the West Cork People. This week, my sister Linda Doyle ‘made’ history by becoming the first female Provost (President) of Trinity in its 429-year history. It was certainly the proudest day for our family, but aside from that, it was another massive step towards rewarding women for their ability. There was plenty of praise from Mna na hEireann in witnessing another glass ceiling being smashed. In the last twelve months, three other women have taken the reigns in Irish universities for only the first time. It is hard to get your head around this considering the academic excellence of so many girls in schools. In her acceptance speech, Linda spoke about “extraordinary days becoming ordinary days”, looking forward to when it will be normal for women to be appointed to high-powered positions. Not just in education, but across the spectrum of fields in Ireland. Not because of gender, but due to one’s ability, experience and vision. That is the true message of equality.

A different strand worth highlighting is that Linda broke another barrier – class.  Our childhood was quite an ordinary, happy, middle class experience but our parents’ upbringings were very different. Both had to leave school at fourteen: My mother out of poverty – her father died and she was put to work. My father out of tradition – his father and grandfather were compositors and printers, so my father was plucked out of school to follow that line, whether he liked it or not. At least the students of today who take up apprentices tend to be given a choice or an opportunity to finish school first, allowing them to mature and be better prepared for adulthood. Fortunately both my parents found a way to go back to college later in their adult lives and fulfilled a desire for higher education, something they passed onto us. Linda went to regular, ordinary, primary and secondary schools. She worked every hour of the summers to pay for her college fees. She is an example to anyone that if you work hard enough, with a focus, and use your talent, then your goals can be achieved. What gender you are, where you went to school, or whom your parents are, should be irrelevant. This can be an aspiring tale for many who despair at barriers in their way to achieving their full potential. The world is changing.

So how far has Ireland changed? Let us explore some of the historic gender barriers that women faced in Ireland.

Universally, women’s enfranchisement was a long time coming. The first green shoots began at local level. The ‘1898 Local Government Act’ allowed some women of property the right to vote and this act also heralded an era for women to sit on Boards of Guardians (which loosely were like councillors at a district level). It must be said that the barrier to vote for national parliament was not just based on gender. Since the emergence of elective governments, other factors such as one’s religion, how much property one owned and one’s age were hurdles that had to be overcome. Yet women’s right to vote was the last one to fall on the arduous and torturous road to the ballot box. Even then, when in 1918 the Holy Grail looked set to be achieved, there was yet another stipulation for woman – you had to be thirty and own or occupy a property with a rateable value of five pounds. This ensured large sways of the female population remained voiceless on the national scene. As Ireland was part of the UK at that time, these were the same conditions as the rest of Britain. When it came to election time, Constance Markievicz was elected for St Patrick’s Ward in Dublin. However, as she and her fellow Sinn Feiners were abstentionists, she did not take her seat at Westminster. She was nevertheless made the first Labour Minister in the breakaway first Dail. This was extremely fitting given her years of work amongst the poor, her support for unions and her role in helping starving families during the 1913 ‘Dublin Lockout’ strikes. Once the Free State came into existence in 1922, women were given full universal voting rights, something that British women had to wait for until 1928, and as long as 1971 in Switzerland.

While the vote was and remains an important landmark for the advancement of women, many other institutions that had been formerly only the preserve of men were chipped away at slowly.  Again, it was in Ireland and not on the mainland where another ceiling was broken. In 1877 the King’s and Queen’s College of Ireland (now the Royal College of Physicians of Ireland), allowed women to register to take medical degrees. The private Catholic University followed suit in 1898 and Trinity rather belatedly in 1904. Whatever about registering as a female student, women in professorships were also unheard of.  Cork woman Mary Ryan became the first female to earn a professorship in Ireland when in 1910 she was appointed to the Chair of Romance Languages at University College Cork.

It was not just in education and politics where women were discriminated, but a lot of everyday life situations. What may be more shocking to some of our younger readers, is that many restrictions remained late into the 20th century. The ‘Marriage Bar’ was a law that legally required women working in public service jobs to resign upon getting married. It seems ludicrous today to envisage such a law, even more so given that it was only revoked in 1970. The private sector held out until 1977. By then, a European ruling declared it illegal to discriminate in any employment on the grounds of sex and marital status. Equal pay for the same job carried out by both sexes only came into force in 1974. The damage had been done for a generation of women. It curtailed the careers of many of them but had long-term consequences too. Short careers meant low incomes and paltry pensions. Even if one wanted to apply for a new job, an earlier act had already barred married women from applying for employment in local authority services.  A lot of this had been influenced by a key component of the 1937 Constitution. Article 42.1 stated ‘By her life within the home, woman gives to the State a support without which the common good cannot be achieved’. While it didn’t say a woman’s role is in the home, it created a legal and social environment to limit women’s advancement into the workplace. I believe a homemaker (female or male) is one of the most honourable, vital and still undervalued jobs one can do. But for decades housewives were not given the opportunity or encouragement to pursue the desires of their own life’s journey. I was blessed with a mother who nurtured us full-time at home; but sadly, in the cultural context I have outlined, she gave up her job when she married. Thankfully, when we were older teenagers, she did a diploma in women’s studies and then geology at UCC, fulfilling a lifelong dream that circumstances and the law had denied her.

The mother and baby home scandal has not only unearthed how illegitimate children were treated by the state, but also shone a light of the sexual morass that women were subjected to.  Society’s unhealthy obsession with women’s sexuality found its focal point in the incarceration of women who had children out of wedlock. I have written about this in detail previously as a separate topic, but it must be acknowledged as an important part of the narrative in the restrictions on women. Even inside the ‘sanctity’ of marriage, women did not ‘own’ their own bodies. Once married, a man could insist on carnal affairs with his wife whether she consented or not. It led to the ‘martial rape’ of many women, something that was only legally made a crime in 1990 – the same year when Ireland voted for its first female president, Mary Robinson.

Most of these problems were not Irish issues. They were universal. Society has advanced globally on so many matters, from gender, to race, to labour and employment rights. It’s an advancing tide that continues to erode centuries of injustice and ignorance. Yet there are many parts of the global who have yet to deliver the social change that defines a fair, equal, safe and prosperous society. More must and will be done. I write the history. Linda, you have made history. As we used to say growing up in Cork City, “Well done girl”.

Tue May 4 , 2021
On Whit Sunday, May 15, 1921, 38-year-old Fr James O’Callaghan was shot dead by Crown Forces in the house of Liam de Róiste TD, on the northside of Cork City. Pauline Murphy marks the centenary of his death with a look at the life of this West Cork native. Fr James […] 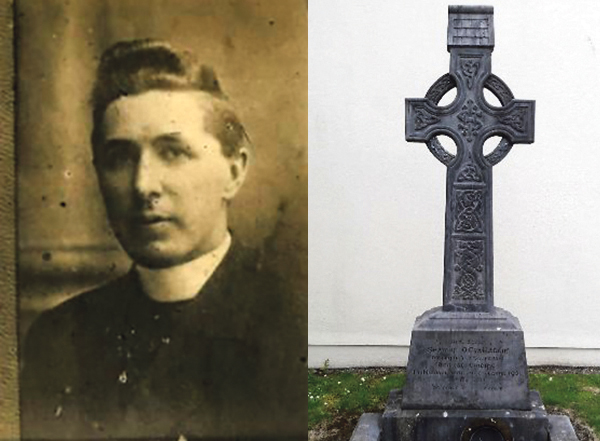