Located on the Cork Institute of Technology (CIT) Campus, close to Cork City, the Rubicon Centre is Ireland’s largest incubation centre and part of a growing business community, which today is home to over 40 companies and 160 employees. Innovation Centre Manager Paul Healy has led the start-up team at the Rubicon since its inception in 2006. Paul explains how the Rubicon is here to support Ireland’s next generation of start-ups in taking a unique idea and helping to develop it into a successful business.

Prior to joining the Rubicon Centre, Paul ran his own venture consultancy business supporting companies across the region, as well as delivering training and mentoring supports on behalf of the development agencies. He has worked in the establishment of a number of Incubation and Enterprise Centres, including the establishment of the Dingle Business Park, NSC, Midleton and Carrigaline Business Parks and Acorn Business Campus and has acted as advisor to a number of other Incubation Projects.

“People come to us with early-stage business ideas,” explains Paul. We act as a sounding board for these ideas, taking people from the idea stage, through training and mentoring, raising business finance, helping them to get their first customers, and then scaling up their business.”

After 14 years in existence, the Rubicon Centre has helped to create 1041 jobs. Many of these clients and former clients have established operations at home and abroad in other countries such as the UK and US.

“Our alumni is in excess of 400,” says Paul. “We’ve supported many well-known companies such as Abtran for example.” Abtran is Ireland’s leading provider of customer and business process management and outsourcing services.

Crest Solutions, based in Little Island is another client of Rubicon. Crest delivers leading technology to regulated packaging and manufacturing sites in Ireland, the UK and Europe.

“The list is endless,” says Paul. “We work across all sectors. The only areas we don’t get involved in are retail, distribution and consultancy.”

Of the successful businesses formed through supports from the Rubicon Centre, 73 per cent are still in operation today; some have gone on to employ between one and three people and many others are employing hundreds.

The Rubicon is part of the CIT entrepreneurship ecosystem, which was first established with the establishment of the Graduate Enterprise Programme in 1998.

Today, as well as working with CIT, the Rubicon Centre works with the other development agencies in the region, including Enterprise Ireland, the four Cork City and County Local Enterprise Offices, SECAD and Udaras Na Gaeltachta, to ensure entrepreneurs have access to a wide variety of supports.

With the economic downturn in Ireland post-2007, the Rubicon Centre provided an invaluable source of support for entrepreneurs. For instance, in March 2007 when American-owned electronics and mobile phone company Motorola announced that it was closing its Cork operation with the loss of 330 jobs, Rubicon stepped in to offer assistance to the workers facing sudden unemployment. “It was a big closure for Cork and we went in and worked with Motorola,” says Paul. “At the time, a number of people who had lost their jobs, with our support, went on to start up their own businesses,” he explains.

“During the recession, so many people, through no fault of their own, lost their jobs and found they had to go into business for themselves or face long-term unemployment,” says Paul. “As a result, we saw a lot of activity in those years after the crash.”

One of the main difficulties for start-ups during the recession was raising finance. This still remains a challenge for early stage companies

“As a start-up business you need two things to be successful,” explains Paul. “You need a customer or potential customer and you need funding. We’re very fortunate in Ireland that we have a huge suite of supports from the State but you also need to be able to raise finance through banks, credit unions, angel investment and so on. When the recession happened, that became more difficult. As a result, we started our own Rubicon Angel Investor Group, which is still running today.”

West-along, O’Neill’s Irish Atlantic Sea Salt based at the end of the Beara peninsula or Cook + Cure in the Mealagh Valley, are just two success stories in Cork County to come out of Rubicon. O’Neill’s Irish Atlantic Sea Salt has won numerous awards since it’s inception in 2010. Its product range is sold in Ireland and internationally. The Cook + Cure app – the first platform that provides tailored nutrition advice based on an individual’s different health problems, health goals, and diet preferences – has been downloaded over 10,000 times since it launched in January 2017.

Kate Hausman, creator of Cook + Cure, initially took part in the New Frontiers programme funded by Enterprise Ireland and delivered through the Rubicon. The three-phase is programme designed to provide an integrated and comprehensive set of business development supports to participants.

“We’re actively recruiting for New Frontiers at the moment,” says Paul. “The first phase consists of 30 hours delivered in the evenings over three weeks. It’s an opportunity to explore and investigate your idea with people in similar business situations. After 30 hours, you’ll have decided if your idea is feasible. I’d encourage anyone with an idea to do some minimal exploration on it, as there is nothing worse than looking back with regret and wondering what if.”

Phase 2 of New Frontiers is a six-month intensive programme, which requires a full-time commitment. There is up to €22,500 in funding to cover full-time participation in the course. This part of the programme can be extended by three months if necessary.

The third phase of the programme gives participants the opportunity to grow their business, their customer base and to generate more sales

“Our clients in the current programme are at the stage of pitching to investors, establishing if their product is viable and talking to customers,” says Paul.

Scale Cork, a partnership between Rubicon and Cork County Council is an exciting new initiative and the first of its kind in Ireland.

Supported by Cork County Council’s economic development fund, the nine-month Scaling programme is open to just six companies in the medtech, agritech and digital health sectors who are willing to scale beyond their current capability and interested in increasing sales, developing exports and building relationship with FDIs in the region.

The only criteria is that the companies must be based in Cork County, have a turnover of half a million and be interested in driving the company on,” says Paul.  A team of eight professionals at Rubicon will deliver mentoring and training to the six successful applicants.

Ag tech is a very interesting sector,” says Paul “which offers huge potential for County Cork and In particular for West Cork, which has leading co-operatives and a number of hugely successful agricultural ventures. One of our current New Frontiers programme participants, Michael McInerney, whose company is Strongbó Agritech, has developed an automated weighing system, which monitors the weight gain or loss in beef cattle or dairy.” The son of a farmer, Michael gave up his job with a multinational in Cork to develop his idea and business. He is currently seeking investment and taking on customers.

“This is a fantastic opportunity for businesses,” says Paul of the Scale Cork programme, which starts in April and will be delivered on-site. “Cork City and County Councils are very progressive,” he continues “ and we work very closely with the Local Enterprise Offices. The advantages for start-ups in this region are amazing, far above those in other regions in Ireland.”

Another very strong initiative offered at Rubicon is Exxcel, a part-time programme aimed at busy female entrepreneurs who have a business idea with high growth and export potential, within the STEM sector (Science, Technology, Engineering and Maths). The programme, run by Lucy O’Donoghue, is over six months, taking clients from idea to investment stage.

The Student Incubation Programme also known as Student Inc. is a programme set up to encourage CIT, UCC or ITT Registered Students to develop their business ideas in CIT. It is a full time programme from June-August.This month the CIT Innovation Prize for Innovation takes place across all Campus’s.

With start-ups, one of the main mistakes Paul sees businesses making, particularly in the tech sector, is that people do the development work first and talk to customers afterwards. “Nothing, not even the worldwide web, replaces talking to people,” says Paul.

Another common mistake is spending hard-earned savings before looking at the funding available. “A lot of people come to us because they’ve run out of money, ”says Paul. “I’d look at what they’ve spent their money on and in many situations they could have applied for funding to match their own investment or had a number of things for free Instead of using their seed capital.

In relation to existing companies, most entrepreneurs work in their own business. “My advice is that you need to be working ON as well as IN the business,” says Paul. “It’s so important to step back and develop the business. This is one of the objectives we hope to achieve with Scale Cork

Anyone is welcome to pitch an idea to the team at Rubicon. “ We have supported a lot of very young entrepreneurs and I see that continuing but also older entrepreneurs many of who have enjoyed successful careers but now want to do something for themselves.

Attracting talent is still one of the main challenges in business. Location, company ethics, lifestyle all factor in to that today. However, going forward Paul believes the climate is good for start-ups. “But the new government must have a strong entrepreneurship policy and continue to develop the enterprise culture – this is very important,” he emphasises. “When you go abroad and stand up and tell people what’s available for start-up businesses in Ireland, more often than not they’re amazed!”

From West Cork, Rubicon has seen the emergence of a lot of web-based companies and food companies.

We don’t want people to migrate to Cork City,” says Paul. “We’re very interested in regional development and we want to provide the supports for people to be able to develop their business in their community.” CultureArk on Sherkin Island is a prime example of such a business supported by Rubicon. The company provides a number of digital services to protect and share your fine collections of art, books, manuscripts and artefacts.

“When we started in 2006, no one knew what a business incubator was,” says Paul. “We had to deal with a fair amount of wisecracks about chickens and so on!” he continues laughing.

Today Rubicon is Ireland’s largest business innovation centre, renowned and admired for hatching so many entrepreneurs and start-ups and supporting them on their exciting and challenging journeys.

Mon Mar 9 , 2020
Tracey Ryan started Bia Beauty in 2011 with a small loan from Skibbereen Credit Union and support from her Local Enterprise Board. She is now Managing Director for Ireland and Master Formulator at Codex Beauty. She lives in Tower, Cork, with her husband Gavin, and their two sons, Feidhlim and […] 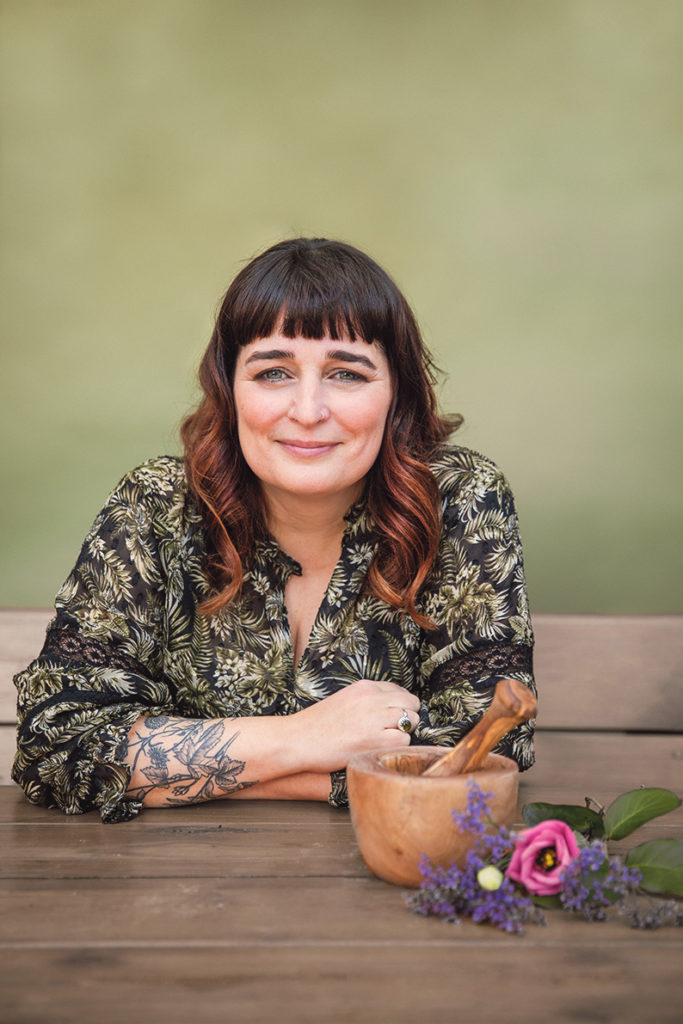