Fiona Hayes delves deeper into the government’s policy to ‘promote’ mineral exploration and finds that currently 28 per cent of the land in Ireland is under licence for mineral prospecting. In fact most of the land here in West Cork is either ‘open for licence’, ‘open with exploration incentives’ or held by a company for certain mineral rights. In County Tyrone, the Save Our Sperrins campaign is taking a stand against a large gold mining operation that inevitably will pollute an Area of Outstanding Natural Beauty in Ireland.

Save Our Skibbereen (SOS) was the successful campaign to stop planning permission for an American Corporate whose operation could have resulted in destruction of many jobs in the shellfish industry by polluting the River Ilen with, amongst other toxins, heavy metals.

However SOS is also the acronym for another environmental campaign; Save Our Sperrins. The secretary of this campaign in County Tyrone is Fidelma O’Kane, whose grandmother was Kathleen Tobin from Mallow, a first cousin of Michael Collins. Kathleen moved North to the Sperrins in 1919 for a teaching post.

Save Our Sperrins is campaigning against a large gold mining operation proposed for the Sperrin Mountains by the Canadian company Dalradian Gold Ltd. The company has applied for planning permission to build a goldmine – with associated waste dump, mercury smelting furnace and ponds for storage of contaminated water in the Sperrins, an Area of Outstanding Natural Beauty.

Fidelma O’Kane went to court and successfully challenged a decision taken by the Department of Agriculture, Environment and Rural Affairs (DAERA) to review and vary the conditions of a water discharge consent issued to Dalradian. She claimed this water discharge consent allowed nine heavy metals to be released into a stream, which flows on to the Owenkillew River near Gortin, a Special Area of Conservation due to the presence of freshwater pearl mussels, salmon spawning and otters. Whilst she won this court battle the company continues pursuing the necessary licences to mine for Gold despite over 38,000 representations from the Public objecting to this planning and less than 4000 in favour.

A big supporter of Save Our Sperrins is Sister Majella, who now lives in County Cork and has spent many years of her life supporting environmental causes. On July 28, 2020, Sister Majella, Fidelma 0’Kane and Mary O’Leary, Chairperson of Cork Harbour Alliance for a Safe Environment, were just three of the speakers at an online conference on environmental activism hosted by OLA and inspired by Laudato Si, the second encyclical of Pope Francis, which has the subtitle ‘on care for our common home’. In this encyclical the pope challenges consumerism and irresponsible development that cause environmental degradation and Climate Change.

Whilst zinc and lead remain the principal commodities of exploration interest in the Republic of Ireland, other commodities that are currently being sought here include; gold, silver, barite, copper, PGEs, molybdenum, lithium, antimony and gem minerals.

Indeed, Government policy is to ‘promote’ mineral exploration to enable the discovery and development of mineral deposits. Currently 28 per cent of the land in Ireland is under licence for mineral prospecting.

With that in mind, I started to explore West Cork, only to find that most of the land here is either ‘open for licence’, ‘open with exploration incentives’ or held by a company for certain mineral rights. Just Four companies hold the 49 prospecting licences in County Cork.

The area numbered 2946 on the map below shows that Adventus Exploration Ltd., a Canadian company based in Toronto, hold the rights to prospect for Base metals, Barytes, Gold and Silver right underneath my house and garden, which my husband and I own freehold and on all the farm land around this area.

Under a 1940 Minerals Development Act this license gives this Canadian Company entitlement to ‘enter onto my land’ ‘and there do all such things as the licensee considers necessary or desirable for the purpose of ascertaining the character, extent, or value of the minerals lying on or under such land…and take and remove reasonable quantities of any such minerals for the purpose of analysis, test, trial or experiment’.

Indeed ALL the land marked in pink on the map is under such licence and under the 2017 Mineral Development Act could be subject to compulsory acquisition of other rights necessary for efficient development of minerals.

Adventus Exploration Ltd are in the process of selling the rights to prospect on my land, along with all their other holdings in the South West of Ireland to an Australian Company based in Queensland and called BMEx Pty Ltd

Furthermore all works carried out under a Prospecting Licence are classified as exempt development under the Planning and Development Act 2000, however the Licencee is entitled only to prospect for minerals, not to extract commercial quantities of minerals without a Mining Lease or Licence, which requires Planning Permission from the Local Authority and an Integrated Pollution Control Licence from the Environmental Protection Agency.

So back to the Pope and Our Lady of Apostles and Michael Collins’ cousin’s granddaughter fighting a Canadian mining company in the North of the Island of Ireland.

Save Our Sperrins campaigners believe this is not just their story, but that International Mining Companies, including but not exclusively Dalradian, are a direct threat to the whole of the island of Ireland. The more planning permissions and licences they are granted, the more they will seek.

With 28 per cent of land in the Republic of Ireland already under licence for prospecting they believe this is an ISLAND WIDE ISSUE, and it is future generations here, on this island who will suffer, as companies based as far away as Canada and Australia will extract the profits and leave the clean up for locals and tax payers.

Save Our Sperrins is asking for people from all over the Island of Ireland to stand in solidarity with them to stop the planning permission for the mining, and the toxic processing plant and waste dump that accompanies it from being granted in this area of outstanding natural beauty.

Pope Francis in his speeches to the United Nations and to environmental activists in 2015 said, “Our common home is being pillaged, laid waste and harmed with impunity. Cowardice in defending it is a grave sin. We see with growing disappointment how one international summit after another takes place without any significant result. There exists a clear, definite and pressing ethical imperative to implement what has not yet been done. We cannot allow certain interests – interests, which are global but not universal – to take over, to dominate states and international organisations, and to continue destroying creation.

People and their movements are called to cry out, to mobilise and to demand – peacefully, but firmly – that appropriate and urgently-needed measures be taken. I ask you, in the name of God, to defend Mother Earth… the future of humanity does not lie solely in the hands of great leaders, the great powers and the elites. It is fundamentally in the hands of peoples and in their ability to organise. It is in their hands, which can guide with humility and conviction this process of change.”

We all need to work together!

You can find more about all the community environmental groups featured on the OLA hosted conference by going to @OLASisters on Facebook and watching the video.

Save Our Sperrins Facebook Page is @SaveOurSperrins Cork Harbour Alliance for a Safe Environment is at www.chasecorkharbour.com

Wed Aug 12 , 2020
At this time of year, it is essential to keep most plants watered. Here at Deelish Garden Centre, we are spending a couple of hours each day watering our plants from our well water. There is no simple rule of thumb for watering as each plant has different needs – […] 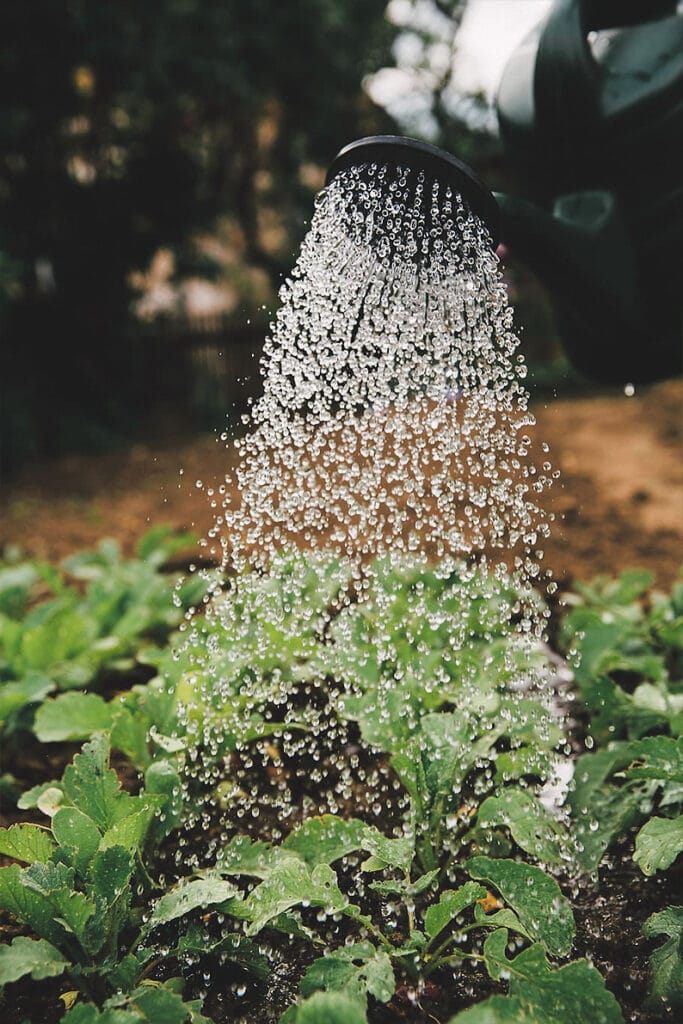