Eight years ago Fiona Hayes was privileged to be part of a team that came together to test a proposed environmental law that could be introduced at International level.

Earth lawyer, Polly Higgins was proposing the ‘Law of Ecocide’ at the UN. Polly’s proposal was that Ecocide become the fifth International crime against Peace.

Ecocide is described as a crime against the living natural world. It recognises that ecosystem loss, damage or destruction is occurring every day; reflected by Ireland’s declaration of a ‘Climate and Biodiversity Emergency.

Currently in the news is the destruction by fire of the Amazon Rain Forests and most people recognise that this is bad for the planet, bad for people, bad for biodiversity and is likely to speed up climate change by destroying a vital carbon sink. But biodiversity loss is far wider than the Amazon, it is right here at home, affecting export earnings, gross domestic product, and jobs in a wide variety of economic sectors from tourism to agriculture to fisheries; and it therefore needs to be sustainably managed for these sectors to successfully grow.

Declines in the diversity of fish species creates decreased resilience to exploitation, smaller catches and higher incidence of stock collapse.

In agriculture loss of genetic diversity and soil biodiversity, destroys soil resilience and undermines its ability to support food plants, thus reducing crop yields. The capacity of our agricultural systems to adapt to environmental change depends on the diversity of; and varieties of crop systems and animal breeds. The loss of crop diversity increases reliance on agro-chemicals to compensate for lowered plant resilience and poor soil, exposing people to health damaging pollutants.

For several years now, professionals involved in developing infrastructure, housing and private commercial developments have recognised the need to climate-proof their investments. In the expectation of more severe weather disturbances they look more carefully at both the site for development and the materials and structure of development, a proofing against natures events.

Recently Global investors managing $32 trillion in assets have called on governments to accelerate steps to combat climate change, with a total of 415 investment companies from across the world signing a Global Investor Statement to Governments, demanding urgent action to accelerate the low carbon transition and to improve the resilience of our economy, society and the financial system to climate risks. “Failure to act could lead to permanent economic damage three or four times the scale of the impact of the financial crisis,” said British Asset manager Schroders.

It is only a matter of time until these same investors realise the financial threat of species biodiversity loss and put pressure on governments to support an International Crime of Ecocide to expand our collective duty of care to protect the natural living world and all life.

This pressuring of governments by the financial world is happening at international and national level, however the implications reach into regional and local level in departments such as the planning department.

Recently a case involving Friends of the Irish Environment (FIE) against An Bord Pleanála was referred to the Court of Justice of the European Union (CJEU).

The board granted a five-year extension for the development to Shannon LNG including construction of four large tanks and jetties to receive ships which will transport fracked gas, (initially from the USA) to Ireland.

FIE claims Bord Pleanála failed to take account of the possibility of the significant effects the proposed development will have on local wildlife and flora, including Bottlenosed Dolphins in Lower River Shannon’s special area of conservation; and failed to take account of the 2015 Climate Action and Low Carbon Development Act, which is intended to drive Ireland’s transition in line with its commitments under the Paris Agreement.

The dispute challenges that the five-year permission extension engages the EU Habitats Directive; under which the planning authority is obliged to fulfil certain procedural requirements before agreeing to a project which is likely to have a significant effect on a European conservation site.

This and other planning and licensing disputes, such as those brought by Cork Harbour Alliance for a Safe Environment (CHASE), Save Our Skibbereen (SOS), Bantry Bay Protect our Native Kelp, Friends of Kenmare Bay and the Dursey Island Visitor Centre objection, all serve to highlight that planning and licensing departments, at national and local level, regularly fail to pay attention to biodiversity safeguards when agreeing development of infrastructure, industry, large-scale agriculture, and tourism; despite that these projects, once approved effectively set policy in an area for many years to come.

The Republic of Ireland has banned fracking, yet the Shannon LNG project includes plans to take imported fracked gas in pipelines, through the country to Northern Ireland and using existing pipelines on to Scotland and thence into continental Europe, via England, Belgium, the Netherlands and Norway.

We would be importing and exporting fracked gas at a time when Ireland, France, Germany and Bulgaria have banned fracking because of concerns about health and ecosystem integrity. To import fracked gas and export it to the UK at a time when the UK and Ireland have both declared a climate and biodiversity emergency seems contrary to the government’s own policy.

When asset management investors and insurers are calling for rapid and increasingly urgent action to combat climate disaster, should we not put the horse before the cart and ensure that planning and licensing is led by government policy and sound economic guidelines at ALL LEVELS of government. Planning and licensing are effectively setting policy that reaches far into the future. Currently we have the cart before the horse. This is a time needing rapid response. Planning and licensing should be restructured and overhauled to enable it to respond quickly to policy change aiming to protect our future.

In the meantime it is ever more important to have public consultation on on local area plans so that the public can ensure that local area plans, and subsequently planning applications are subject to appropriate assessment and are in line with climate change and biodiversity plans.

Polly Higgins always thought that to change the law such that investors and insurers had a vested interest in protecting the earth would change the way that business is run. It seems that investors and insurers are beginning that change. If we also rapidly change planning and licensing process to keep up with policy, we may just make enough difference to give the future a fighting chance.

The people make the place

Tue Nov 5 , 2019
Next time you enjoy a salad at Dunmore, look closely for the ultraviolet flowers of the cornflower. This radiant beauty is not just a decorative flower; it is for bees a UV beacon, for this is how these princes of the environment navigate. Where there are bees, there is a […] 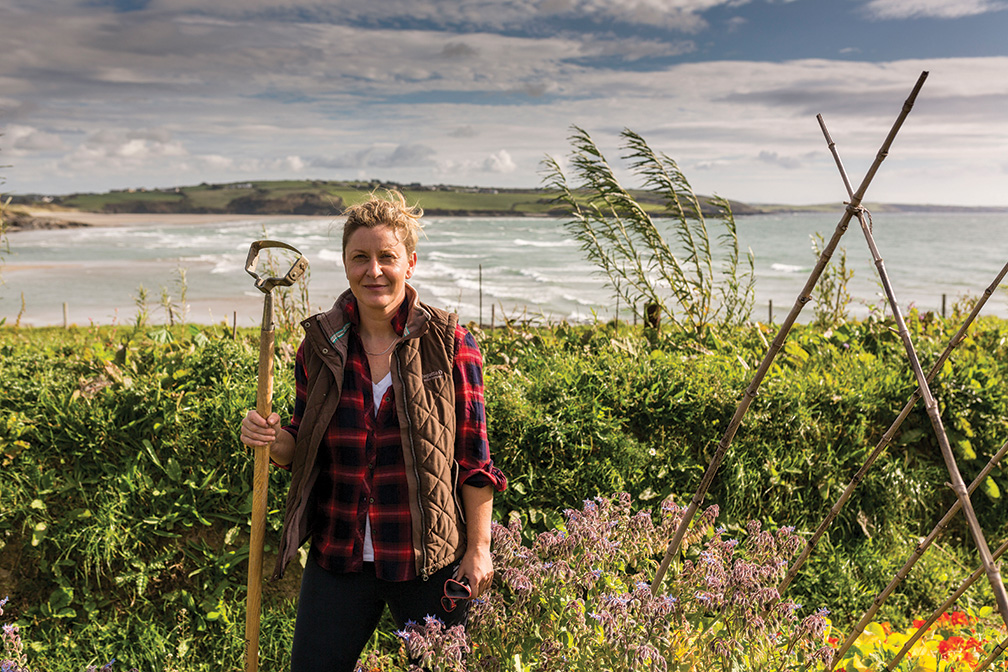