Ahead of his charity gig for the Ethiopia Deaf Project in the Celtic Ross Hotel on February 9, I interviewed radio DJ Ronan Collins about his years of working in the music industry. His daily show on Radio 1 is the most listened-to music show in the country.

How did you get started in the music industry?

Has the music industry changed much?

“There’s been big changes! First of all nobody gets recording contracts any more. I think there are only three or four record companies — as they used to be called, ‘major record labels’ —in the world any more. They seem to control the music and own everything.

“If you look at performers, everyone seems to record everything now. They put it up on Youtube and they send it to radio stations. Too many of them expect it to be played just because it’s recorded! There doesn’t seem to be any kind of system where people kind of earn their dues. Everything comes down to money in the end. If you take a band that are trying to play gigs, it’s very expensive for them to do it, because venues don’t want to pay them anything — they don’t want to take a chance. When they want music in a place they’re happy to have a fella with a guitar, a drum machine and a backing track and all that carry-on. It’s very difficult for musicians and performers to get experience, to record properly, and to get the proper channels so that their music can be heard.

“And then the other side of the spectrum: young kids—the ones a lot of the new music is made for — they don’t listen to radio, they just acquire the music through this yoke in their hand – this phone. They don’t pay for it, ‘cause it’s there for nothing, and it’s very fickle. So it’s changed dramatically! It means that a guy like me, working on Radio 1, doesn’t have much of a connection with current music trends. There is some terrific stuff around, but it’s so difficult to get exposure for it.

“I’m very lucky in terms of working on radio and playing music. I’m fairly certain that I’m the only guy that works on daytime radio on a music programme who doesn’t have to stick to a format or a playlist. As far as I know on every other radio station in the country they don’t have 100 percent freedom of choice for presenting. What I play is not just what I like, it’s what I think people will enjoy hearing. I play oldies, but I also play contemporary music, particularly from Irish artists. It’s all music—it doesn’t matter what style it is. The kind of audience that I have—35 or 40 plus in years—if you were to go to their homes and check out their record collection, they don’t have one style of music, they have a bit of this and a bit of the other. What’s wrong with playing a mixture? That’s one of the joys of my job—that I’m left alone to do that, as that’s the style that I’ve been allowed to develop over the years.

“It’s suggested by people and they don’t even realise that they’re suggesting it!”

“When it comes to contemporary music I enjoy a lot of stuff. I enjoy hearing what Kanye West is doing—not socially—but I’m interested in their work. Whether it’s Kanye or Radiohead, I’m always interested in what’s around and every now and then I will include someone from completely left field to a daytime radio programme because it fits. If it doesn’t fit I won’t play it. There’s no point in me playing outrageous stuff just ‘cause I like it. That’s not what it’s about. If you were to contact me and ask for ‘After All’ by The Frank and Walters, I’ll play that and then maybe a day or two later I’ll play Something Happens, because they were the same era, vibe and message, and that’ll appeal to you as well. So that’s how it works—it’s suggested by people and they don’t even realise that they’re suggesting it. My job is to know what fits. You won’t always hit the bullseye, but you try to hit the dartboard—that’s the important thing!”

“I’m a DJ—and I’m becoming an increasingly rare species! My knowledge is gained over 40 years of listening to what people want and what people suggest, and getting information about who’s doing it—and I love all that! It’s been my life’s work. It’s been pretty bloody enjoyable!

“The style of music makes no difference as long as the quality is good.”

“The style of music makes no difference as long as the quality is good. You’re not gonna play a song that’s badly played or badly produced no matter how many people ask for it, you know? I don’t have to have a total love for what I play, but I have to have belief in it. It’s a bonus if I like it! If I bring somebody back to a good time in their life, and that’s been sparked by hearing a group or a particular song, then I’ve done my job.

“Look at all the innovators, young musicians, young performers who don’t get exposure without going on a talent show on TV, which they’re not gonna win because their backstory isn’t interesting. Nobody cares about the music or the performances on talent shows. The producers are making television programmes and there has to be a drama in their life, they have to have the back story. But what about all the musicians? Why can’t they get exposure? It’s very difficult and my sympathy is with them.

“If you take David Kitt or Declan O’Rourke, those guys find it hard to make ends meet—never mind make money! David Kitt can’t afford to live here. And there’s no outlet for them and no encouragement for them and that worries me! Bands continue to play together because that’s what musicians do. And there’s no greater joy than playing live gigs, but it’s a very tough life. I just think that they deserve support and I like to give it when I can. A lot of young bands send me stuff. I have to say that it really doesn’t fit me on Radio 1. It’s not what I play, you know? And then they say, ‘Where can I bring it?’ And I say, ‘I don’t know’, ‘cause I don’t know anymore.”

Ronan and his Big Band & Singers play the Celtic Ross Hotel in Rosscarbery on February 9 in aid of the Ethiopia Deaf Project. Tickets are €25.

If you have any comments or events, you can contact me by email
gary@westcorkpeople.ie

The house the Baker’s built

Mon Feb 4 , 2019
Aine Baker talks to Mary O’Brien about her family’s long journey from renting properties to finally achieving their dream of building a home of their own in West Cork. A native of Donegal, Aine is married to Noel, who grew up on a farm in West Cork. The couple, who both […] 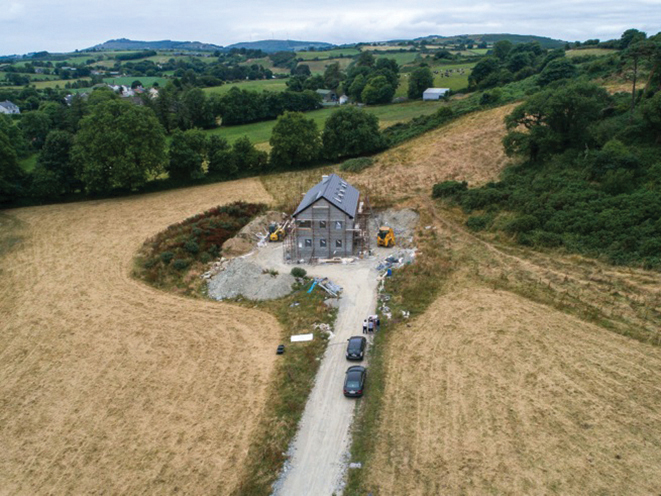