At time of writing a decision on the levels of emission reductions that has to be delivered by farmers between now and 2030 has yet to be made. It feels like you can’t turn on a radio or open a news site without having to hear or read of the cuts being discussed.

I’ll admit that when the ‘national herd’ gets a mention in broadcast media my initial reaction is to change channel or switch off. It’s not that I’m trying to bury my head in the sand on the issue but the whole debate is increasing in toxicity and polarisation. Level heads on both sides of the argument tend to be ignored for sound bites from the extremes within the debate and in my mind that’s unhelpful and, despite it being such a broad societal issue, I want to know what it will actually mean for me.

The headlines say the percentage of cuts in emissions from agriculture will be between 22 to 30 per cent. I haven’t a bull’s notion what it will actually mean for the farm. I can’t find any model that can show a farmer what the consequences for their farm will be for any of those figures or indeed any figure in-between. That lack of clarity is very frustrating. There’s a handbrake up on any form of future planning and even if a figure is decided upon there is no road map on how it will be achieved.

While those figures need to be trashed out, life goes on and in an effort to reach the target set out in the Programme for Government of farming 330,000ha organically, payment levels have been increased for farmers wishing to convert. The news was announced by Minister of state at the Department of Agriculture Pippa Hackett.

They will also receive a lump sum payment of €2,000 if they decide to convert from January 2023 and following year one, the lump sum payment will decrease to €1,400 per annum for an unspecified number of years.

Rates for tillage farmers rises to €320/ha to convert and €270/ha from year three while dairy farmers are in line to be paid €350/ha to make the switch and €300/ha once they are fully converted.

These new payment rates are subject to approval by the European Commission as part of the ongoing discussions on approval of Ireland’s CAP Strategic Plan, and would apply from January 1, 2023.

Despite those incentives, I don’t think I’ll be signing up for it. Saying that, most of the practices I do on the farm, certainly on the cow and calf side of the herd, would be standard organic practices. The big catch for me is when it comes to housing for the winter. Extra building would be required to comply with the housing requirements and I can’t justify that cost.

In comparison to the airwaves, farm life is relatively peaceful. Breeding has pretty much finished up so the day-to-day routine consists of basic herding. Much of the on farm grazing and silage plan was on hold until the rain that arrived at the end of July. Now it’s a case of sit and wait to see what impact that has on growth. Dung samples were taken from most groups in the middle of the month and results have shown low worm counts so far, however there are a number of calves at home with dirty behinds so they will get a worm dose, but only those affected. The surprise was a high rumen fluke presence in the replacement heifers so they will get a treatment for that when they are in for scanning in a few weeks. Fodder stocks are within reach of the target set earlier in the year so more grass is becoming available. With most silage sorted that means extra ground will be available for grazing. If this was a dairy farm grass demand would be relatively static for the year but, as there are calves growing, it means their intake of grass increases rapidly and that has to be factored into the plans for the next few months.

Paudie, you’re hosting the West Cork vintage threshing and ploughing associations charity vintage working day this year. There’s a lot planned for the event, can you give a run down on what people can expect?

The day will include a major display of working vintage farm machinery. There’s 25 acres of silage that will be cut using a variety of vintage and classic silage gear including double chop, single chop and self-propelled harvesters. Across from that there’s six acres of barley that we’ll be combining and threshing using vintage gear and there will be a display of old and new ploughing as well.

The event is sponsored by Derry O’Donovan Ltd and will be opened by online sensation and agricultural contractor Farmer Phil; he has 64,000 subscribers on YouTube and is extremely popular in the farming community. His father Derek or Farmer Phil will be there too. He’s nearly a bigger legend in agri-contracting circles at this stage. As well as the machinery action there will be an auction of four top quality, in calf Friesian heifers, a maiden Friesian heifer, a pedigree Angus heifer and a beef bullock from our own farm. Cork marts are running that on the day. There will be music and set dancing as well. It’s a fundraiser for three local charities too. The Irish Cancer Society, Marymount Hospice and Cairde Clonakilty Hospital Dementia Unit. So we’re hoping to raise as much money as possible for the three charities involved.

How did you get involved?

Micheál Hayes and I were asked to join last November and they asked if anyone knew of somewhere that would be suitable for hosting the silage cutting event so I said they could host it here. Everything that will be harvested on the day will be used by the farm afterwards. As part of it we were asked to grow a bit of barley and, as a result, we’re now growing six acres. That kind of worked out well with the way ration prices went up. I’m also growing some maize. We haven’t grown crops for the best part of 10 years. I had been growing beet, maize and wheat in the past, but sold the tillage gear, so I hired in, as it’s a one off.

My father used to do threshing on hire before so we’re aiming to have the tractor he used when he was contracting to run Don Coakley’s thresher. It’s a Fordson standard major and it’s been fully restored on the farm. My uncle Pat brought it brand new in 1954 and we still have the original bill of sale from CAB motor group in Cork and the original brown tax book.

What type of farm do you have?

It’s mainly a store to beef farm and I do some livestock haulage and I do some raking for a local contractor too. I’m also an agent for ABP. I came home to farm on a part-time basis in 2005. We would have been running a suckler herd and growing some crops. I was working off farm at the time so we decided to move to a store system.

It’s very much a family farm. My parents are living on the farm, as well as my wife, Denise, and we have four children under seven. My father Jerry is still involved and this year I bought a few calves for my son Arthur. I suppose, like us all when we were younger, he wanted to get involved, so for the last two years I was listening to “when can we buy calves, when can we buy calves”. This year I bought a few really good calves locally so he’s been involved in the feeding and looking after them and it’s a good interest for him. You could say there’s three generations on the farm and we’re really looking forward to welcoming people here on the day.

Tue Aug 2 , 2022
Celebrating 45 years in business in July, West Cork plastics manufacturer, Carbery Plastics Limited, welcomed Senator Tim Lombard to its Clonakilty plant. After meeting with the Carbery team, Senator Lombard was given a tour of the company’s manufacturing operations. Established in 1977, Carbery Plastics is firmly established as a leading […] 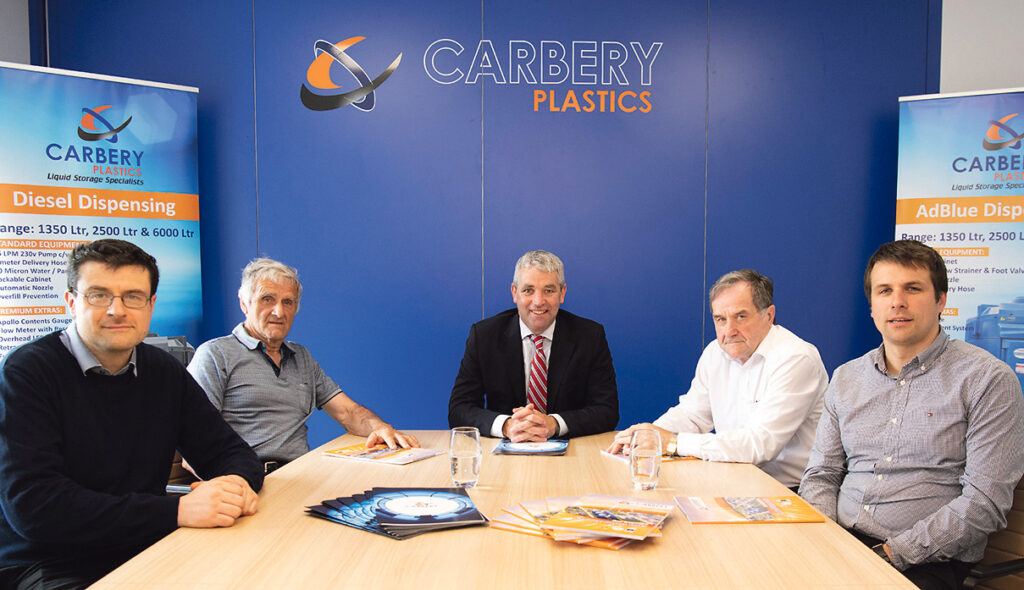