“So I chastised a great multitude of men and women with the lash of starvation and, alas! was the cruel murderer of many thousands….” – William the Conqueror

William the Conqueror is most notably known for being the King that triumphed at the Battle of Hastings. In 1066 William and his army defeated an English army under the Anglo-Saxon King Harold Godwinson, beginning the Norman conquest of England. Prior to this victory, William, a French Viking, was known as ‘William the Bastard’ as he was an illegitimate child, born out of wedlock circa 1028, to Robert I, the Duke of Normandy, and Herleva, who is traditionally described as a tanner’s daughter. After the success of battle he became known as ‘William the Conqueror’ and went on to hold the title ‘King of England’ for 21 years, ruling with an unheard of brutality, even for the time.

Every English monarch who followed William, including Queen Elizabeth II, has been a direct descendant of the Norman-born king. According to genealogists, more than 25 per cent of the English population is also distantly related to him, as are countless Americans with British ancestry. All lands, wealth and assets that are currently in possession of the Royal family of England can be directly traced back through lineage to being the spoils of William’s 21-year conquest and colonisation of England.

It is historically agreed that Willian’s reign saw a viciousness, and callous disregard for life, that was unprecedented. This is well-documented. However, what is less well known is that he ‘exploded’ at his own funeral.

Though William instituted constitutional and social reforms, forged close ties with France, and ended Viking influence in England during his reign, he was also, as mentioned above, a tyrant. In 1069, he began what would become known as ‘The Harrying of the North’, a campaign of putting down rebellions by burning villages and crops, as well as slaughtering herd animals and even villagers. Those who survived became desperate (they reportedly resorted to cannibalism) and many starved to death. Being King, William lived and ate like one and, as a consequence, became enormously overweight. It was his size that eventually contributed to his death as he was engaging in a battle with his own son, Robert, in France.

Robert was aggrieved that he was not afforded land he believed he was owed and sided with his father’s enemies with the aim of getting what he felt was rightfully his. William mounted his horse to prepare for battle but the horse unexpectedly reared, thrusting the wooden pommel of the saddle into his abdomen with such force that it punctured his intestines. The mortally wounded king journeyed to Rouen, where he spent six agonising weeks dying… with knights, noblemen and clergy by his side.

According to Orderic Vitalis’s Historia Ecclesiastica, the king eventually confessed that what he had done during his reign was terrible (although this claim is largely disputed by historians):

“I treated the native inhabitants of the kingdom with unreasonable severity, cruelly oppressed high and low, unjustly disinherited many, and caused the death of thousands by starvation and war, especially in Yorkshire… In mad fury, I descended on the English of the north like a raging lion, and ordered that their homes and crops with all their equipment and furnishings should be burnt at once and their great flocks and herds of sheep and cattle slaughtered everywhere. So I chastised a great multitude of men and women with the lash of starvation and, alas, was the cruel murderer of many thousands, both young and old, of this fair people.”

On September 9, 1087, William finally died. His body was then removed from Rouen to Caen, a small village in France. This journey is roughly 70 miles and would have taken a considerable time. As the corpse slowly made its way, by water and by road, the bacteria in the late King’s gut leaked into the rest of his body, decomposing the tissue at a frightening rate and filling the late king with putrid gas. In an unusual twist of fate, the night the King’s body arrived in Caen, the village had succumbed to a fire, leaving some parts of the city in ruins and others untouched; but most importantly the fire delayed the funeral mass even further while residents fought the blaze. Furthermore, whilst the fire was successfully extinguished, a sickly heat could still be felt during the funeral; this along with the poor embalming methods of 11th century funerary practices, combined with the extensive journey, ultimately became a deadly mix that would soon become apparent to the funerary procession.

By the time the mass was over and the burial could actually take place, it was weeks since William’s death. The residual heat from the fire, combined with the delay it caused, had resulted in William’s bowels inflating to capacity and his remains swelling beyond previous measure. While trying to lower William into his final resting tomb, the king’s corpse would not fit. When the gravediggers attempted to force the body into place, “the swollen bowels burst, and an intolerable stench assailed the nostrils of the by-standers and the whole crowd”, according to Orderic. The crowd was immediately covered in the former King’s putrefied innards and overwhelmed by the scent of decomposing flesh. The horrified funeral party immediately left the church and didn’t return. The funeral was hastily finished, and quickly forgotten, which to this day, is most likely why the explosion is a relatively unknown fact about William the Conqueror.

Tue Jan 19 , 2021
A Mealagh Valley farmer who has helped raise almost €90,000 for the world’s poorest people has been given an Outstanding Commitment Award by the Irish development organisation, Concern Worldwide.    Patrick O’Sullivan has been running an annual raffle for Concern for over 40 years, after he saw images of the famine in Bangladesh on TV while in a friend’s […] 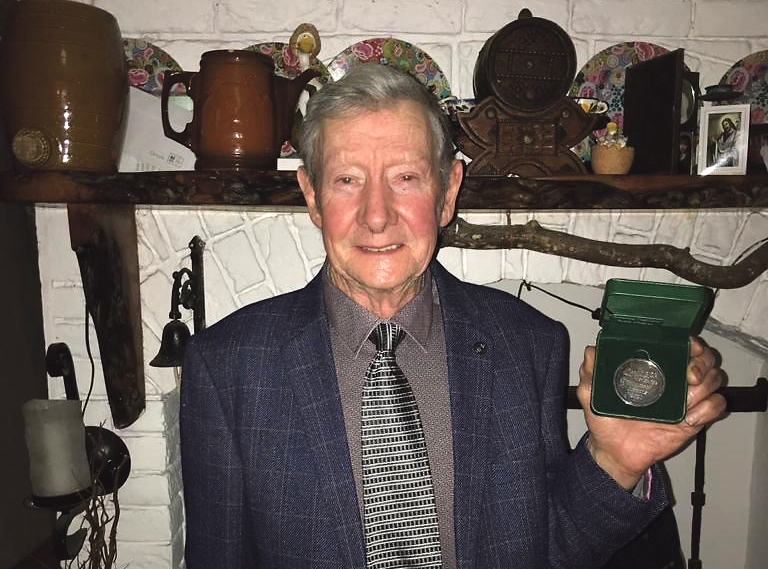