“They were put on a rich diet and began to recover and put weight on but then they died suddenly.” –Laurie Pettit

Refeeding syndrome for many centuries was an unknown entity and remained somewhat of a myth until the liberation of the Nazi concentration camps in 1945; it is also possibly the least talked about cause of fatality in the Second World War.

Soviet soldiers upon the liberation of WWII camps were met by thousands of men, women and children who had been in a state of medical starvation for months on end. The well-meaning soldiers – met at the gates of the camps by POWs with their ribs and sternum protruding from their bodies and chests and obviously in need of medical care – took food such as biscuits and chocolate bars from their own government-issued ration supplies and gave them to the prisoners, not knowing that it would lead to their almost immediate death. It is estimated that 500 POWs from Auschwitz concentration camp and as many as 14,000 from the Belsen concentration camp – most famously known as the site where Anne Frank’s family died upon capture – died of refeeding syndrome.

There are reports from 1945 of prisoners dying immediately having taken their first bites of food, however when fleeing the concentration camps, the Nazi’s burned thousands of documents and medical records that they kept from previous experiments on the prisoners, therefore it is very difficult to confirm this to be true. The reports of people dying immediately may also be attributed to the many other ailments that the POWs would have been suffering from. What we do know now (from documented refeeding cases in the years post 1945 and advances in medical knowledge from cases of patients suffering from anorexia) is that death from refeeding, if it is done incorrectly, occurs within 36-48 hours of first taking in sustenance to the body. This is a result of the body going into shock from the re-introduction to calories.

As Soviet scouts, then troops, arrived at the Auschwitz complex, bewildered prisoners greeted them with tears and embraces. Anna Polshchikova, a Russian prisoner, later recalled the gruff confusion of the first soldiers. “‘And what are you doing here?’ they enquired in an unfriendly manner. We were baffled and did not know what to say. We looked wretched and pathetic, so they relented and asked again, in a kinder tone. ‘And what is over there?’ they said, pointing northwards. Also a concentration camp. ‘And beyond that?’ Also a camp. ‘And beyond the camp?’ Over there in, the forest, are the crematoria, and beyond the crematoria, we don’t know.”

The first Soviet troops to arrive moved on toward other targets, but the Red Army soon took over the camps, establishing field hospitals on site. Polish Red Cross workers — volunteer doctors, nurses and paramedics who just months earlier had participated in the Warsaw Uprising — assisted in the recovery too. “The situation was desperate,” recalled Józef Bellert, the physician who organised the group. “We could barely administer the most urgent medical aid.” As they got to work, they saw body parts strewn around ad hoc cremation pits used after the SS demolished Auschwitz-Birkenau’s crematoria; human remains and ashes were everywhere. Survivors suffered from malnutrition, bedsores, frostbite, gangrene, typhus, tuberculosis and other ailments. And though the SS had attempted to destroy all evidence of mass murder, they had left massive storerooms filled with shoes, dishes, suitcases, and human hair. “It was chaos,” says Jonathan Huener, a Holocaust historian at the University of Vermont.

Once established, the Red Cross staff and local volunteers responded as best they could to the survivors’ needs, navigating a cacophony of different languages. They diagnosed patients, gave them identification documents and clothing, and sent over 7,000 letters to help the patients locate family and friends around the world. “Some of the sick did not realise that they were now free people,” recalled Tadeusz Kusiński, a Red Cross orderly. At least 500 of the 4,500 patients died, many from refeeding syndrome or a lack of sanitary facilities.

Shocked at the skeletal condition of some of the prisoners they were liberating who had been subsisting on starvation diets for months or even years, Allied soldiers handed over every scrap of food they could lay their hands on. But then — many of these reports say — ‘the succour has an unexpected and horrifying effect: some of the prisoners fall instantly dead at the first bite, within minutes many others have followed.’

The most infamous of these stories comes from the Bergen-Belsen concentration camp in northern Germany, best known as the camp where Anne Frank died after her family’s arrest. Belsen did not have gas chambers and did not conduct mass executions as were carried out at Auschwitz and others, but by the end of the war it was suffering from a terrible epidemic of typhus and was as deadly as any camp. In December 1944, five months before the camp was liberated, Germany began mass transportation of prisoners from other camps into Belsen. This made the overcrowded, diseased, and starvation conditions far worse. From that point, the death rate of prisoners approximately tripled every month, reaching over 18,000 dying in March 1945 alone.

When the allied troops arrived, they found 60,000 survivors, most of who were near death from typhus, starvation, or both. From an article about Belsen in a BBC series on the liberation of the camps: ‘Some inmates had been starved for so long that they had lost the ability to digest the rations that well-meaning British soldiers offered them; within minutes of taking a biscuit, some inmates just passed away.’

During starvation our body makes a number of changes to its chemistry in response to starvation, changes which are intended to preserve its most important tissues for as long as possible. Electrolyte imbalances often result. Then when you start eating again, a whole wave of fluid and electrolyte shifts takes place. Insulin production increases, among other changes. The main feature of refeeding syndrome is hypophosphatemia, a dangerous shortage of phosphates in the serum, as well as shortages of other minerals. Phosphorus in particular is essential for all cellular processes, and hypophosphatemia can result in respiratory failure, cardiac failure, arrhythmia, seizures, coma, and death. Although the liberating soldiers at Belsen quickly learned that refeeding was doing its share of harm, the mechanisms weren’t known. But they couldn’t just not feed the people. And from what’s recorded historically and what’s known today, it does indeed appear that fatal refeeding syndrome was responsible for at least some substantial portion of those 14,000 post-liberation deaths.

We do see refeeding syndrome today. There’s no ethical way to deliberately put test subjects into such a dangerous physical state, but people already in that condition do come into hospitals, so we have study data on the syndrome. Mostly these are anorexia nervosa patients, but there are a variety of other types of patients with severe malnutrition. Among other lessons, these cases have given us an opportunity to study the actual time of onset of hypophosphatemia. The average time is 1.9 days after refeeding begins. This is generally in line with the best reports from Belsen and other camps, which stated that many prisoners died after just a few days.

More importantly, these modern cases have taught us how to refeed safely and avoid the syndrome altogether. According to data published in the British Medical Journal, which studied over ten thousand such cases, 100 per cent of patients went into hypophosphatemia when fed intravenously with a solution that did not include phosphorus supplementation; but when it did, the incidence was reduced to just 18 per cent. So clearly, phosphate supplementation is key in refeeding. The current recommended guidelines for refeeding malnourished patients is to start with multivitamin supplements, and then proceed with feeding at 10 kcal per kilogram of body weight per day, and slowly increase it over four to seven days. This allows the patient to adjust to the re-introduction of calories and has a much higher chance of survival. The phenomenon of refeeding syndrome is unusual but the unfortunate events of the liberation of concentration camps during the Second World War has allowed us to become more educated on the topic and in turn equipped us with the ability to save the lives of countless people in the future.

The ‘Secrets’ of Skibbereen’s Masonic Lodge

Mon Sep 7 , 2020
Visitors to Skibbereen are sometimes surprised to come across a building, incongruously tucked away on Mardyke Street, with a neo-classical façade adorned with a ‘square and compasses’ motif. Locals have ever known it simply as the Masonic Hall.  But what is freemasonry and what secrets lie within? The present master […] 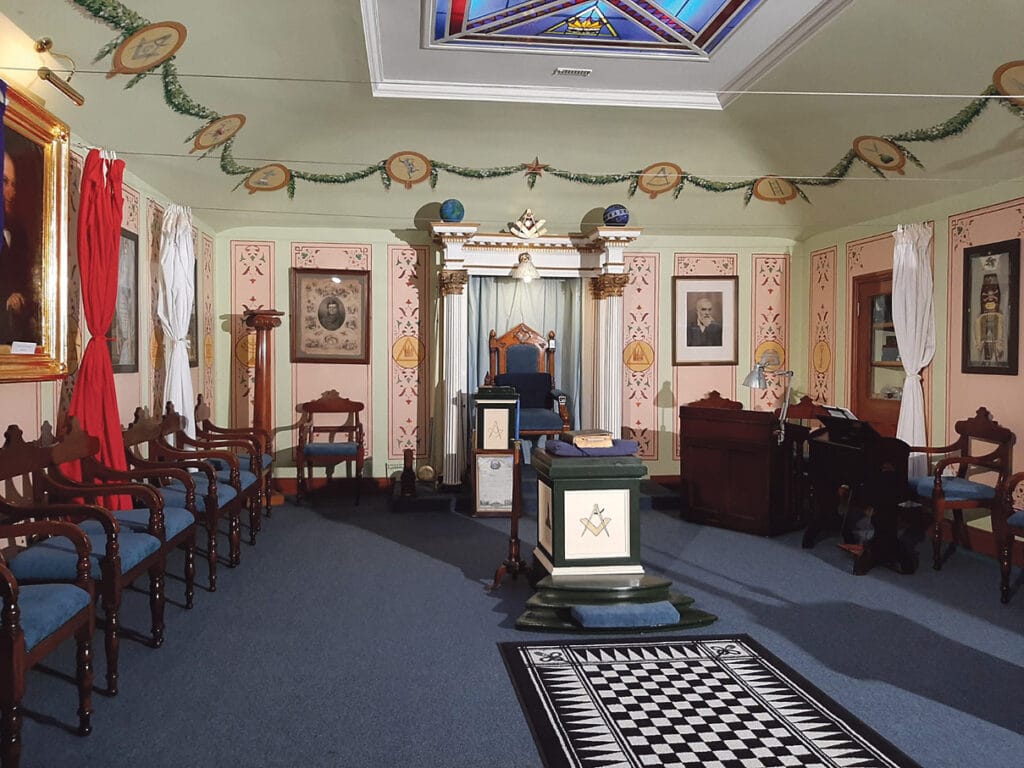