Hunger strikes are synonymous with Irish history. Some of our most famous men and women have taken part or died during a hunger strike. A hunger strike is used when all other avenues of communication have broken down. It is generally a last resort undertaken in order to bring attention to a person or party’s wishes that have, up until that point, been ignored or dismissed.

There are two different types of hunger strike, wet and dry. Humans can generally last months without food; the longest hunger strike in history is recorded at 94 days by Irishman John Francis Crowley. However, the human body can only survive roughly a week without water. The effects of a hunger strike on the physical body of the participant are catastrophic and often irreversible.

Committing to a hunger strike is an astonishing show of belief in one’s cause, considering the consequences of even a successful strike when your demands are met, as the aftermath of the strike can be incredibly debilitating.

While a precarious weapon, used strategically, a hunger strike cannot only draw attention to a situation of injustice or violated rights, but also elevate the cause and credibility of those who have chosen to take such a strong and personally risky action, giving hunger strikers more leverage at the negotiating table. Famously in 1981, during a prolonged hunger strike for better conditions and political recognition, 10 imprisoned members of the Irish Republican Army died, including strike leader Bobby Sands (after 66 days) who was elected MP from prison during the strike. The strike radicalised Irish nationalist politics, elevating Sinn Féin into a mainstream political party. Publicity is critical to a strike, especially to escalate pressure as the stakes rise and public attention grows. In the 1981 IRA hunger strikes, Bobby Sands began first, but other strikers joined one at a time, at staggered intervals to generate maximum pressure and public support.

But how does a strike such as this affect the body? Long-term refusal of food affects most organs and systems in the human body. Such behaviour causes muscle weakness, vulnerability to infections, psychological problems, and, eventually, organ failure. It is estimated that if a protester is healthy before going on a hunger strike, and continues to receive fluids, he or she is at risk of dying from malnutrition after six to eight weeks. However, a protester can die much sooner, after three weeks if they are seriously ill. If refusing fluids too, death can come after one week. While the loss of muscle mass may be significant, a person usually dies because of an infection or organ failure.

While people can survive up to several weeks without food under certain conditions, physical and mental impairment can begin within two to three days. Due to a lack of carbohydrates, the body switches to its fat and protein reserves and starts using them as its main source of energy. This leads to fat and muscle loss as well as changes in the body’s processes. Levels of electrolytes also drop significantly, which can lead to impairment of various bodily functions. After two weeks, a person can experience dizziness, weakness, loss of coordination, and a low heart rate. Within the next week, he or she may suffer from vision loss or other neurological problems. After one month or after losing more than 18 per cent body weight, there may be permanent damage to the body. The person may experience difficulty swallowing, vertigo, hearing and vision loss, as well as possible organ failure. After 45 days, there is a high risk of death, mostly due to infection or cardiovascular collapse.

Even after a protester decides to end a hunger strike, there is the potential risk of ‘refeeding syndrome’, which occurs as a result of shifts in fluids and electrolytes, meaning that giving too much food or fluids too quickly may be dangerous and potentially fatal. It may include liver dysfunction, heart arrhythmia, and pulmonary, neurological, or other symptoms. Therefore, when a person is coming off of a hunger strike, trained health-care professionals make sure that nutrients are cautiously and gradually introduced to anyone who has refused food for five days or more.

Mon Jan 16 , 2023
The retirement of Kieran Cotter, the former Coxswain at Baltimore RNLI, was marked recently with a party held in Jacobs Bar, in the village. While Kieran officially retired at the end of 2020, the station was not able to properly mark the occasion during the pandemic and decided to wait […] 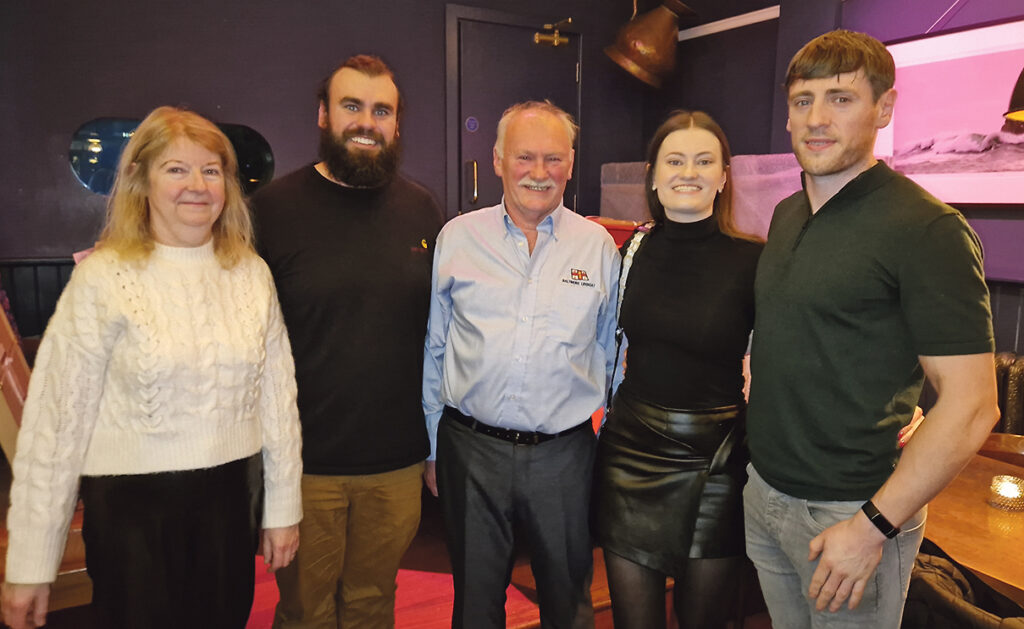