In 1954, USA, the civil rights movement won a landmark case which ruled that the segregation (the deliberate and legal separation of the white and black races), of schools was unconstitutional. This landmark case, known as ‘Brown v Board’, would mean the dismantling of all segregated institutions from Mississippi to Maine, from New York to New Orleans. Sounds like a marvellous victory? Almost. One seemingly innocuous phrase scuppered the whole process. There was no legal timeframe or timetable by which these institutions such as schools, universities and libraries would legally have to desegregate. The key phrase in the legislation was the term ‘all deliberate speed’. At first glance, it may seem this is an invite to hasten speedy change. The more legalistically- and cynically-minded opponents to the legislation soon realised that ‘all deliberate speed’ was vague enough to be interpreted as any indefinite timeframe. What followed was a purposeful stalling of time, which resulted in little to no desegregation in  many parts of the states. It took many more deaths, protests, laws and presidential influence, before this was rectified and replaced by a genuine workable law a decade later.

Looking at the language of the COP26 final document, much of what was good about it will be defined by similar vague references. Despite reaching an agreement with 197 countries that signed off on it, it lost much of its potency with literally a last-minute change. The phrase phase ‘down’ the use of coal, as opposed to phasing it ‘out’, was added. This seemly inconsequential word will reduce the potency of the agreement in a way the phrase ‘all deliberate speed’ undermined the 1954 Brown v Board legislation. No wonder the chairman at the conference, Alok Sharma was close to an emotional breakdown, understanding that this blatant word change, at the behest of China and India, undermined all the rest of the document. The phrase is vague enough to allow all the powerhouses to continue to burn large amounts of coal, at a non-quantified ‘reduced’ level, making it impossible to hit the all-important 1.5 temperature target that is the minimum we are told, to prevent the planet from irreversible damage. In order to achieve our goals, world emissions must drop by 7.2 per cent annually. Yet emissions only dropped by 6.4 per cent last year when the whole world stood still during the pandemic. ‘Reducing’ the production and use of coal, will never be enough.

While any free thinking and educated person can no longer ignore the science (and the weather – have we ever seen a milder winter? And let’s not forget the hurricanes, heatwaves, floods and snowfalls, just in the last half dozen years in Ireland), when it comes down to personal responsibility will we take the requisite action? When the shoe fits, we accuse our government of being a nanny state; a government that tries to tell us how to live. Back in 2004, how many were aghast that the government had the audacity to tell us where and when we could smoke? And didn’t they have the same audacity again, daring to tell us not celebrate Christmas too much during the rapid, raging, rise of Covid? Did we listen when warnings were issued that society could close down in January and hospitals could be overrun? So why will people listen now when it comes to changing their lifestyles to save the planet?

We want our government and other world leaders, to act to combat global warming, but how soon will it be, before we accuse them again of too much interference in our private lives? Not long I’m guessing. Supporting climate change in the abstract is easy. Save the polar bears from the melting snowcaps; stop the rain forest from being cut down, tell China to stop polluting their rivers. All honourable causes, but none of these have a day-to-day, direct, tangible impact on us here. So let’s move from the abstract to specific daily issues to really see what we would do to stop climate change.

I bet you agree that the national herd should be cut, if you are not a farmer and it doesn’t affect you,? I reckon you think electric cars are a great idea, if you are a high-income earner and living in urban areas with lots of electric charge spots. I’m going to guess that as a nation, little to none of us will stop using air travel, since we can’t drive or get the bus or train to Paris, Vienna and Rome, like our fellow continentals who have the choice of not using air travel. And if a recent RTE survey is anything to go by, I’m imagining most people think retro-fitting for their house is a brilliant idea, because (a) It will save you money on your bills, (b) You’ll only do it if the government pays for it, and (c) In third place, it will be good for the environment. Let us see how supportive we are when new carbon taxes add to the burgeoning household bills? I’m not immune to any of these criticisms myself, but I want to be clear. Unless we all invest in real change, then whatever the document at COP26 prescribes, all the far-off abstract ideas will be futile.

The ‘Green hypocrisy’ of the human race is everywhere. In the weeks running up to COP26, a few hours south of Glasgow, the city of Newcastle was draped in the royal flag of Saudi Arabia, the world’s largest producer of oil. A government-backed Saudi Arabian consortium has just purchased their newest plaything – a premiership club called Newcastle United. The Saudis are ruled by a despotic royal dynasty, where democracy and free press are non-existent. It is a barren land for women’s rights, which remain basic. The royal family courts both the Americans and far right Jihadist groups. When a journalist called Jamal Khashoggi tried to write about the many human right abuses, they sent a government agent to assassinate him in a Saudi consulate in Istanbul.

Yet all is forgiven and forgotten by football fans because they are going to spend ‘gazzillions’ of pounds on extremely skilled and pampered footballers who will be kissing the badge of Newcastle FC one week, despite not being able to locate it on a map, the week before. Football lovers will not question the oil money used to fund their team. After all don’t some of these fans do their part and, reuse, recycle and reduce at the weekend? Whether it’s Newcastle, Chelsea, Man City or any other team, sport or institution, built on with oil money, nobody will care about the pollution created by their benefactors. They will not protest on the street condemning this as dirty money, made from the destruction of our planet. Why? Because they will argue that saving of the planet is only down to our governments. They will declare that the ordinary man and woman have no influence. They will sing a catchy song from the terrace about their new owners and Saudi prince and all will be forgiven when they beat another oil baron-funded team.

Yet there is a part of me that is hopeful. The COP26 was unimaginable a generation ago. In the last few decades, countries are no longer decrying climate change as a fantastical tale. We have seen the emergence of wind, tidal and solar energy that was once an epic science fiction. When I was a kid, the word recycling did not exist. Today it is an integral function of daily life. Young people have a lot more education, and can be influencers on a greater scale, (with no little help from social media), more than any generation that has lived on the planet. Greta Thunberg is the current face of this youthful uprising. Political parties with green agendas are getting into governments across the world. Is this enough to create the chasmic shift we need? For the cynical, it is as far away as ever. For the hopeful, it was merely a single word change away, at COP26. Time is ticking. We must accept the inevitable and take personal responsibility. Yet we must continue to agitate our governments for more tangible changes too beyond the capabilities of the ordinary person.

People laughed at Greta Thunberg for her ‘hysterics’, when she warned us of global extinction if we don’t act. Remember, they laughed at Noah when he was building his ark and we all know how that turned out!

Winter in the garden

Fri Dec 10 , 2021
by Nicholas Mitchell I am writing this during the third week of November. Ordinarily, bird feeders would have been placed around the garden three weeks ago, but it has been such a mild autumn that this has not been necessary. The birds have been less in need of supplementary food during […] 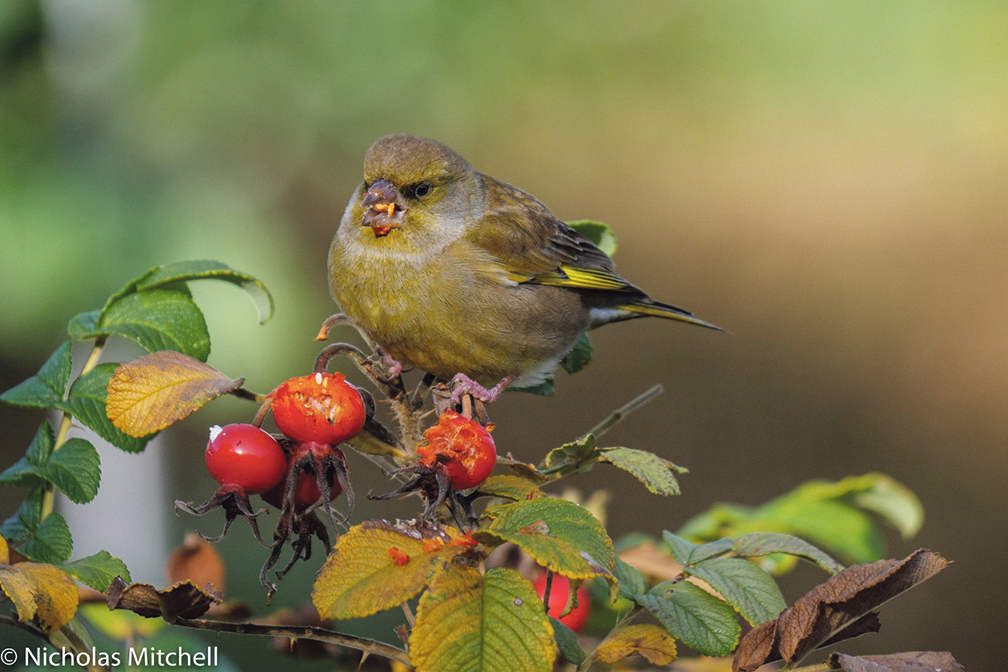