Christmas as a time of celebrations and revelry goes back to the customs of  pre-Christian times. Mistletoe, yule logs, holly and evergreen trees are of pagan origin, sacred to the Romans and Celts.

Of all the Christian festivals, Christmas was considered the most important in Ireland, and preparations began some weeks in advance. Advent, the four weeks before Christmas, was a time of fast, like Lent, up to 1917. Advent brings us from a time of remembering the dead (November) into the joyful anticipation of the birth of the Saviour, Jesus.

In rural Ireland the men tidied and cleaned the farmyard and whitewashed the house during Advent. Inside, the women scrubbed and polished, washed the linen and made the house as clean and tidy as possible. Often cattle and pigs were slaughtered and some of the meat shared with neighbours. The woman of the house raised flocks of geese and later turkeys, which were sold at the Christmas Markets, often held on December 8. Christmas was anticipated with joy by young and old alike. Most families had relations ‘abroad’ in the USA and they eagerly awaited the ‘American letter’, which always contained some dollars.

By today’s standards the Christmas shopping was meagre enough but everybody did their best to buy luxuries not eaten during the rest of the year. With the money earned at the Christmas Market, the women ‘brought home the Christmas’ – toys and sweets for the children, new clothes, sometimes tobacco, fruit cakes, barm bracks, as well as sherry, whiskey and stout. The Christmas cake and pudding were baked weeks before Christmas.  Rural people gave presents of farm-produce – potatoes, vegetables, a chicken, a turkey to relations living in the town. Shopkeepers always gave a Christmas ‘box’ to their customers – usually a fruit cake, barm brack, a big candle or a box of biscuits.

By Christmas Eve all the preparations would be completed. The house was decorated with holly, ivy and colourful decorations. Holly, with its glossy green leaves and festive red berries, was perfect for the holiday. It was placed in many parts of the kitchen and the ‘parlour’. Sprays were placed over the door, on the dresser, on the mantelpiece, the clevvy, on picture frames. It was believed that an angel occupied each spike of a holly leaf.

Christmas Eve was probably the most magical day of the year. The traditional dinner in West Cork and in other parts of the country was ‘stock-fish’ (usually salted ling) with potatoes and onion sauce. This old custom is still practiced by some. The dish is known as ‘priail’ in parts of Ireland.

As darkness fell on ‘Oíche Nollag’ (Christmas night) a big candle – ‘Coinneal Mór na Nollag’ – was lit and placed in a hollowed out turnip or a jar filled with sand and positioned in the kitchen window. It was usually lit by the youngest of the family, with help if necessary.  The father would lead the family in prayer. The usual blessing was: ‘Go mbeirimid beo ar an am seo arís (May we all be alive this time next year).  Soon after lighting the candle, the Christmas celebrations started with the Christmas supper. This began with the cutting of the rich Christmas cake and production of tea, punch and bottles of stout. Sweets and apples were given to the children and the whole family sat around the warm glow of the fire. Sometimes a neighbour dropped in and was treated to whiskey or stout.

The children were ‘packed off’ to bed early, with threats that Santa Claus wouldn’t bring them anything if they were not in bed when he called. Before bedtime they hung their stockings at the fireside or sometimes at the end of the bed. Santa didn’t arrive in Ireland until the early 20th century. His popularity was increased by the 1947 film ‘Miracle of 34th Street’, and later, ‘It’s a Wonderful Life’ starring James Stewart. From Dickens we get many images – sleigh-bells sounding over the snow and carol singers with lanterns walking our streets and so on.

A light in the window lighted the way of  strangers out after dark. It goes back to ancient times, when the laws of hospitality were stronger and not abused. It also meant that you were welcoming the Holy Family.

At midnight, on Christmas Eve, according to a belief held in most parts of Ireland, the cows and donkeys kneel in adoration of the Christ Child. Nobody, however, should spy upon their devotions. The cock is overwhelmed with joy at Christmas and will crow at unusual times – to hear him crow at midnight was a particularly good omen. At any other time of the year to hear the cock crow at night was a bad omen.

Wed Dec 8 , 2021
“The holidays are upon us, Thanksgiving and Christmas. I have a lot to be thankful for this year,” says Clonakilty native Julie O’Brien. “As I look at my beautiful upside-down Christmas tree, back where it belongs on the ceiling of The Junction, my bar, my home away from home, in […] 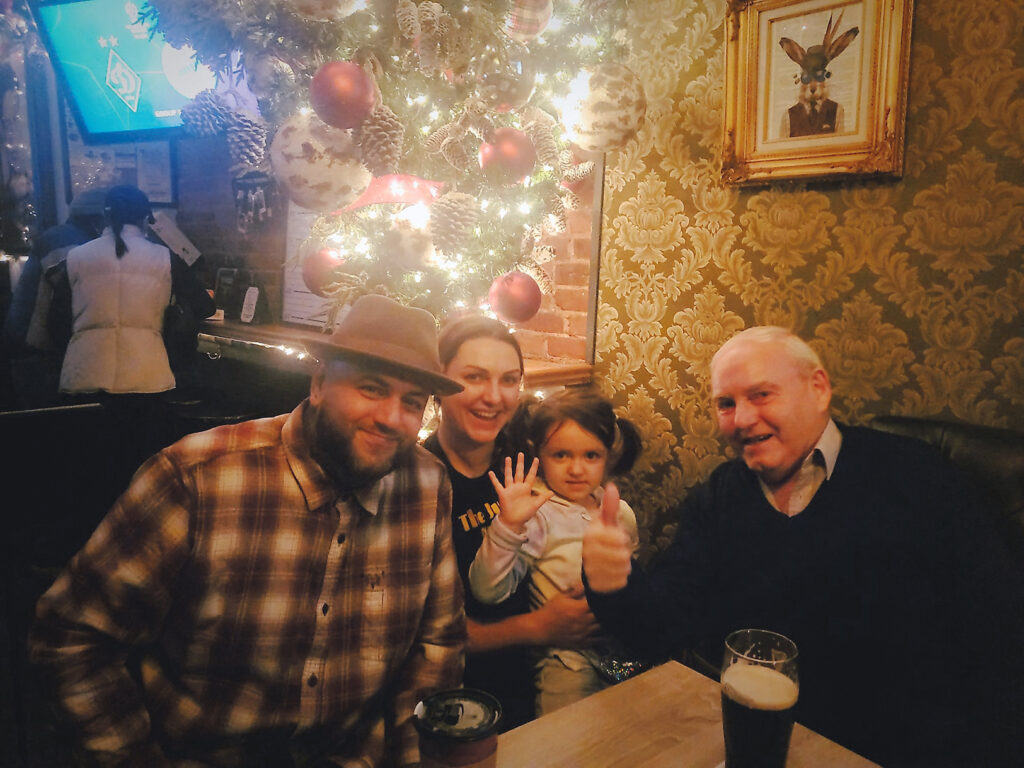