Although in existence since the 19th century (when first written record was discovered) cargo cults only came to notoriety during, and most notably after WWII. The cargo cult that gained the most notoriety and attention was one worshipped by the people of the Melanesian islands.

A cargo cult is a system of belief based around the expected arrival of ancestral spirits in ships bringing cargoes of food and other goods. Unable to rationalise the unusual items that the soldiers who landed on these islands during the war brought with them and the aircraft that dropped off the soldiers (believed by the islanders to be metal birds) the islanders attributed it to the gods.

The soldiers were in fact landing on the islands to better position themselves for attack on neighbouring islands, or in some cases to rest and plan assaults that they would carry out elsewhere. However they did share some of their rations with the island inhabitants.

This carried on for the duration of the war, which the Melanesians believed was because of their prayers. However when the war ended, the military abandoned their airbases and stopped dropping cargo. In response, charismatic individuals developed cults among remote Melanesian populations. These cult leaders promised to bestow deliveries of food, arms and other equipment on their followers, claiming that the cargo were gifts from the islanders’ ancestors.

The most notable case is that of ‘John Frum’. He became the light that his worshippers needed in times of darkness and uncertainty. Frum is a mythical figure associated with cargo cults on the island of Tanna in Vanuatu. He is often depicted as an American World War II serviceman who will bring wealth and prosperity to people if they follow and worship him. As anthropologist Kirk Huffman, who spent 17 years in Vanuatu, explains: “You get cargo cults when the outside world, with all its material wealth, suddenly descends on remote, indigenous tribes.” The locals don’t know where the foreigners’ endless supplies come from and so suspect they were summoned by magic, sent from the spirit world. To entice the Americans back after the war, islanders throughout the region constructed piers and carved airstrips from their fields. They prayed for ships and planes to once again come out of nowhere, bearing all kinds of treasures: jeeps and washing machines, radios and motorcycles, canned meat and candy.

But the venerated Americans never came back, except as a dribble of tourists and veterans eager to revisit the faraway islands where they went to war in their youth. And although almost all the cargo cults have disappeared over the decades, the John Frum movement has endured, based on the worship of an American god no sober man has ever seen. Many Americans know Vanuatu from the reality TV series ‘Survivor,’ though the episodes shot on the island hardly touched on the its spectacular natural wonders and fascinating, age-old cultures. Set between Fiji and New Guinea, Vanuatu is a Y-shaped scattering of more than 80 islands, several of which include active volcanoes. The islands were once home to fierce warriors, among them cannibals. Many inhabitants still revere village sorcerers, who use spirit-possessed stones in magic rituals that can lure a new lover, fatten a pig, or kill an enemy.

Local leaders say that John Frum first appeared one night in the late 1930s, after a group of elders had downed many shells of kava – a potent beverage used in ceremonies for relaxation – as a prelude to receiving messages from the spirit world.

Chief Kahuwya, leader of Yakel village speaking of Frum said, “He was a white man who spoke our language, but he didn’t tell us then he was an American.” John Frum told the islanders he had come to rescue them from the missionaries and colonial officials. “John told us that all Tanna’s people should stop following the white man’s ways,” Chief Kahuwya says. “He said we should throw away their money and clothes, take our children from their schools, stop going to church and go back to living as kastom people. We should drink kava, worship the magic stones and perform our ritual dances.”

With no notion of the workings of world-commodity markets, the islanders see only the sudden closing of plantations, reduced wages and unemployment; and are inclined to attribute their insecurity to the whim or evil in the nature of individual planters. Europeans who have witnessed outbreaks inspired by the cargo cults are usually at a loss to understand what they behold. The islanders throw away their money, break their most sacred taboos, abandon their gardens and destroy their precious livestock.

Observers have not hesitated to use such words as “madness” “mania” and “irrationality” to characterise the cults. But the cults reflect quite logical and rational attempts to make sense out of a social order that appears senseless and chaotic. Given the ignorance of the Melanesians about the wider European society, its economic organisation and its highly developed technology, their reactions form a consistent and understandable pattern. They wrap up all their yearning and hope in an amalgam that combines the best counsel they can find in Christianity and their native belief. If the world is soon to end, gardening or fishing is unnecessary; everything will be provided. Of course the cargo never comes. The cults nonetheless live on. New breakaway groups organise around ‘purer’ faith and ritual. The cult rarely disappears, so long as the social situation which brings it into being persists. Meaning, there will be an infinite number of John Frums to worship. The cycle is infinite.

Tue May 3 , 2022
Outstanding contributions made by individuals and community and voluntary groups across Cork County was showcased at the Ninth Annual Mayor’s Community Awards. Mayor of the County of Cork, Cllr. Gillian Coughlan presented a total of twelve awards on the night, including a special posthumous presentation, with Noreen Minihan from Clonakilty […] 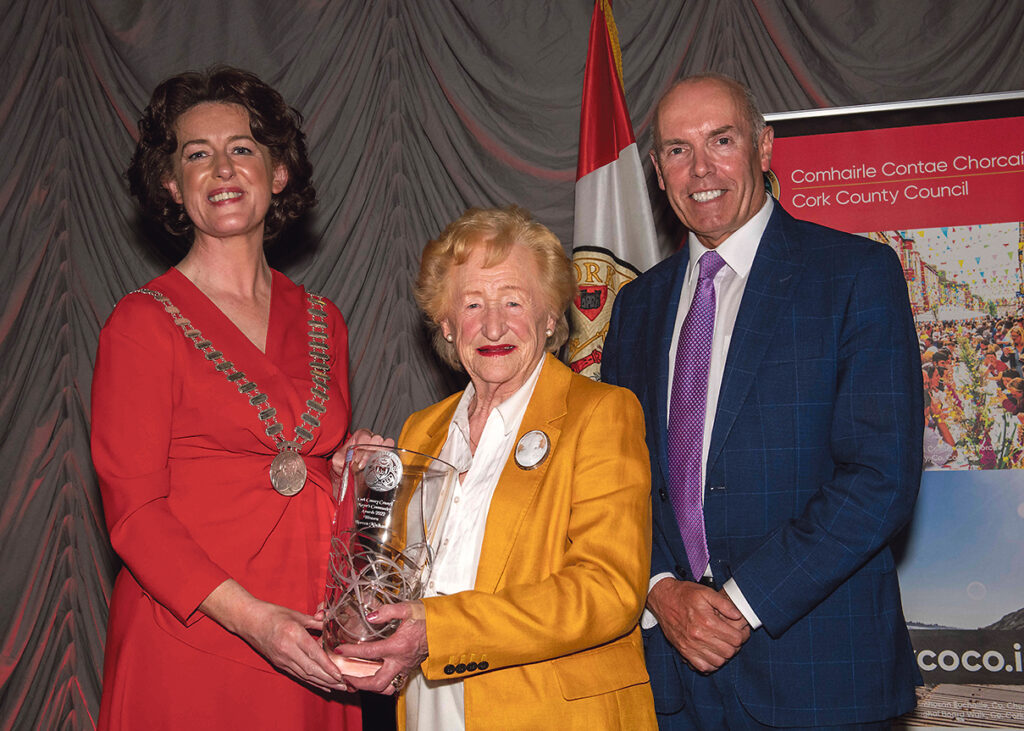