The abundance of honey in early Ireland can be measured from the size of the vessels used either to collect the honeycombs or to pay tribute to an overlord, or for kitchen use. A barrel, so large and heavy that it could be lifted only as far as the knees by a strong man, was used, and a smaller vessel that could be raised on the shoulder and head. At table each person had a dish of honey into which he dipped his portion of meat, fish or fowl.

Honey and mead played their part in the lives of the early saints. A legend told about the childhood of St. Ciarán of Clonmacnoise seems to prove that there were wild bees in Ireland. One day Ciarán’s mother said to him, ‘All the little boys of the hamlet bring honey out of the honeycombs to their households, except you’. On hearing this, Ciarán went to a certain well and filled his vessel with water, which he blessed so that it turned into honey. He brought this home to his mother, who was, no doubt, hugely impressed, and convinced that her son was more clever and kind than any of his companions.

Whether or not Ireland possessed native bees, tradition would have us believe that a sixth century saint, Madomnoc of Co. Kilkenny, first brought bees to Ireland from Wales. The story of their arrival is full of charm. The youthful Madomnoc set out for Wales to study at the monastery of St. David.  He remained there for many years where his special care was the beehives, which formed part of the great abbey’s wealth. At length when the time came for Madomnoc to return home, his little friends refused to be parted from him. Three times they followed him to the ship waiting to set sail for Ireland and three times he brought them back to their hives. In the end, St. David, ever generous, presented the swarm of bees to his friend and disciple. He blessed the bees with the words: ‘May the land to which you are brought abound with your progeny and may their species and generation never fail, but our own city shall be forever without you’. The prophecy was fulfilled, for the Welsh bees prospered and multiplied in their new home, their honey was ever sweet and the forests of Ireland were perfumed by that sweetness. It is said that after Madomnoc arrived in Ireland the bees that accompanied him were left at Fingal, near Balbriggan, and the name of the holy place was the Church of the Beekeepers. Madomnoc’s feast day falls on February 13.

If Madomnoc introduced the bees to Ireland, St. Gobnait of Ballyvourney, Co. Cork, is regarded as the patron saint of beekeepers. There are many stories in folklore about her dealings with bees. One story goes that an invading chief and his army descended on the country around Ballyvourney with plunder in mind. They wanted to despoil the land and rob the cattle. But Gobnait was a redoubtable woman. She met the would-be robbers holding a beehive in her hands. She prayed for guidance and then let loose the bees. The bees stung the marauding chieftain and his followers so badly that they fled for their lives. Their work done, the bees returned to the hive and the making of honey. The name Gobnait is supposedly the Irish version of the Hebrew ‘Deborah’, which means ‘honey-bee’.

A belief once held in many parts of the country was that if a death occurred in a household it was important to go to the hives and tell the bees; if not, they would either swarm elsewhere or die in the hives. Another belief was that you should never buy bees but let them come to you. It was said that if you liked bees they would come, if not, they would stay away.

Bees also featured in the classical lore of Ancient Greece and Rome. For example, it was supposed that great writers and orators, such as Plato, Sophocles and Virgil, had been fed by bees or had their lips touched by honey in infancy. The Greek philosopher Aristotle features in a popular Irish legend that connects him to the bee. The story goes that Aristotle wanted to find out the secret of how bees made honey and constructed a glass beehive so that he could watch them at work. The bees, however, covered the inside of the beehive with wax, so that Aristotle’s view was blocked. In a rage Aristotle kicked the beehive, so that it broke and all the bees flew out and stung him until he was blinded. The story ends with the statement that there were only three things that Aristotle could not understand: the secret workings of the bee, the ebb and flow of the tides and the mind of a woman.

The Irish language has native words for bee (beach), honey (mil) and mead (mid). The usual Irish word for something sweet is ‘milis’ (like honey) and of course, sweets are ‘milseáin’.

Consider a historical trip to Connemara

Mon Aug 9 , 2021
One of the more positive aspects to emerge out of this global pandemic has been a greater appreciation and discovery of one’s locality, county and even country. Previously hidden beauty spots are now being explored and utilised and there has been a phenomenal switch to this lifestyle in the last […] 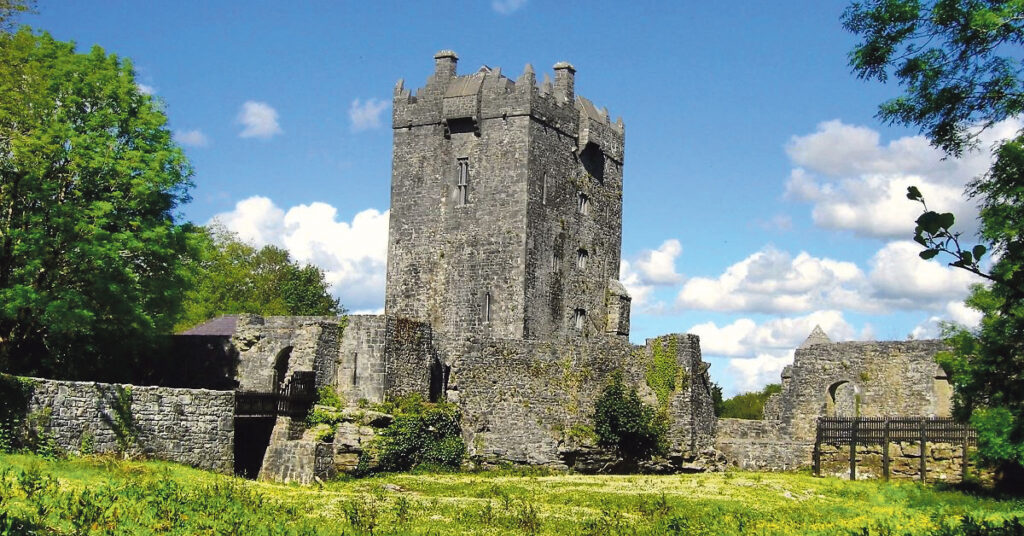