These days, raw honey is considered a superfood with such varied health properties such as antibacterial, antioxidant, wound healing, brain protecting, as well as being nutritious and delicious. Here in West Cork we are lucky to have local beekeepers who take pride in the quality of their honey and the way they treat their bees. One such beekeeper is Leo McDermott. I had heard about Helen and Leo from friends and neighbours and met them now and again on school runs but hadn’t really connected them with beekeeping until we were looking for local food producers to take stalls at our local Community Producers Market in Baltimore. I finally met them properly when we had adjacent stalls in the market and I persuaded them to tell me their story.

Sitting in the kitchen of the beautiful house that they have built, Helen told me that she was brought up in the house next door, where her mother still lives. Her family farmed and grew a substantial amount of their own food, as did many people farming small acreages in the 1980s.

Leo, on the other hand, is a city boy making his way in the building trade in Dublin as a carpenter but he always had a passion for the sea. In 1998 a friend suggested he might like to try sailing and he ended up in Baltimore getting involved with Glenans Sailing School, loving it so much he stayed on for a second week becoming hooked on sailing as a result. He worked away in Dublin, sailing as much as he could in his spare time until 2008 when the recession hit and the construction world collapsed. He was lucky to sell his house, which he had completely renovated, just before the housing market went into a tail dive and then, at a loose end, he headed to West Cork where he felt at his happiest. He divided his time between Baltimore and Dublin for about a year before getting involved with the Ilen Project and Glenans, also buying an old wooden boat to repair and renovate and it was around this time that he met Helen.

The two of them have created a lovely home for their children on a plot of Helen’s mothers land but before they settled down they spent a year sailing around Europe with their two small girls; at that time the youngest was five

months and the older daughter two-years-old. What an adventure…visiting the Scilly Islands, France, Spain and Portugal. At around the same time as they received planning permission to build in 2016, Leo started beekeeping. His first two hives were placed on the spot where the house is now. He had always been fascinated by bees and learnt a lot from the internet, reading many books and eventually joining the Carbery

Beekeepers Association, but he hadn’t ever had the space or opportunity to keep them until he moved to West Cork. Listening to him talking about his beekeeping journey, how he has studied them, sometimes coming home from work and just sitting by the hives watching their behaviour, learning their habits and flight patterns, it is obvious that what he really cares about is the bees and any spare honey for us to eat is a bonus. He builds his own hives now and keeps his bees in as natural a way as possible. The honey is not heat treated and his bees have access to all the flowers, vegetation and trees around Loch Ine. It’s special. Leo and Helen both work, Leo gardening and building maintenance and Helen works in recruiting for a Swiss pharmaceutical company, luckily working from home. Although Leo is the main beekeeper, the whole family is involved with the honey especially at harvest time. The girls, Aisling and Roisin make the labels for the jars, and most weeks Helen and the girls bring their honey to the market. This is the first year that they have actually sold honey. In the past they have given jars of honey as gifts or swapped with neighbours for eggs or vegetables etc., being part of a small community of local beekeepers and growers who help and encourage each other. Now though we can all taste their honey.

A special Spanish dish for summer

Mon Jul 4 , 2022
Fideua – feed-ay-wah, is a Spanish dish similar to Paella, which is perfect for summer eating. It’s cooked in a same way but it’s made with vermicelli pasta instead of rice. It originates in Valencian region of Spain and seemingly was invented by a fisherman who headed out to sea […] 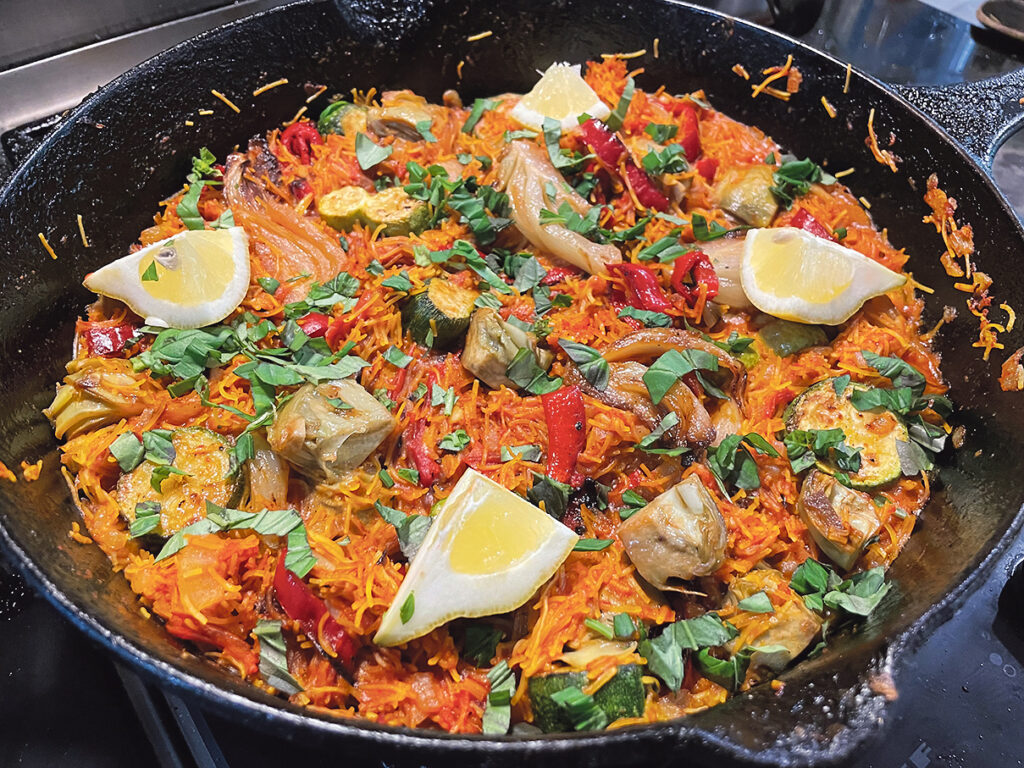